Eovaldi and JBJ carry Sox past Astros in Gm-3

GAME 3 SIGNIFICANCE: Of the previous 21 Game 3s in ALCS history that occurred with the teams tied at one game apiece, the Game 3 winner has gone on to win the ALCS 16 times (76 percent). 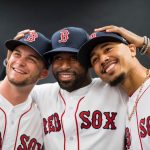 CLUTCH RBI: JACKIE BRADLEY JR. had one hit and one walk in 19 bases loaded plate appearances during the regular season, but had a three-run double in Game 2 of the ALCS and a grand slam in Game 3…Bradley Jr. is the 24th player in Postseason history to have back-to-back games with at least three RBI, with the MLB record of three straight Postseason games with at least three RBI held by GRAIG NETTLES of the Yankees in Games 1, 2 and 3 of the 1981 ALCS vs. the Athletics and the Red Sox’s NOMAR GARCIAPARRA in Games 1, 2 and 3 of the 1998 ALDS vs. the Indians.

FORCE PLAY: MITCH MORELAND’S hit-by-pitch in the eighth inning forced in a run, the 56th time a Boston batter has been hit by a pitch in the Postseason and the first time a HBP has resulted in an RBI for the Red Sox.

PEARCE ARROW: STEVE PEARCE has recorded at least one hit and scored at least one run in each of his six starts in the 2018 Postseason…The only other Red Sox player to match Pearce in six consecutive starts in a single postseason is MIKE LOWELL in 2007.

K-LESS PITCH SOURCE: With no strikeouts in 5.0 innings of work in Game 3, DALLAS KEUCHEL became the first Postseason starting pitcher with 5.0 or more innings worked and no strikeouts since JEREMY GUTHRIE of the Royals in Game 3 of the 2014 W orld Series… Keuchel is the 35th starter in Postseason history with such a pitching line and the third in ALCS history, with the first two both coming in 2002 by RICK REED of the Twins in Game 2 against the Angels and followed by teammate JOE MAYS in Game 5.