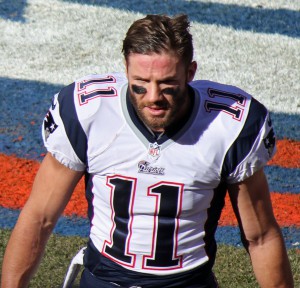 Patriots are on the Denver

Q: Football game on Sunday.
JE: There is. A good one.
Q: Has it been interesting to watch the way this organization has kind of reloaded more – [Don’t’a] Hightower has become [Jerod] Mayo and [Tedy] Bruschi and you’ve become [Wes] Welker. Is it interesting to see just how it reloads?
JE: With every team over time there’s going to be new players and father time is undefeated when it comes to those kind of things. It’s been a special journey for me to see where the team was and how it’s gotten to where it’s at [now]. It’s one of those unbelievable things that you’re fortunate enough to go in and play in so many big games. When the season is over, you look back and [say], ‘Man, that’s pretty cool.’ But right now you don’t think about those things. You’re more thinking about trying to get to the next one and right now we’ve got the toughest team on the schedule that we played thus far with the Denver Broncos. So it’s cool and it’s been a journey, but we’re trying to keep that journey going.
Q: Do you feel like you’re prepared to go to Denver and execute the game plan?
JE: We’re preparing, and we have a few more days, a couple of more days to take advantage of and go out there and tighten things up. It usually goes down to the best team preparing usually comes out on top. With a team like this and the type of game it is, you really have to honk down on just everything because you don’t know if they’re going to bring something new. You don’t know if they’re going to stay with what they’ve been doing, so it’s one of those things where we still have two day to go out there and tighten things up and prepare [up until] the final day.
Q: How did you get things tightened up on your own? You had a couple of drops last week and you were pretty tough on yourself around your locker and you were mic’d up as well, so we could hear what you said on the field. How did you settle down and what did you work on this week to get all that in the past?
JE: Just going out and catching extra balls. Plain and simple. The game comes down to fundamentals, getting open and catching the ball. That’s my job. Making the situation as hard as possible during the week, going out and doing more ball drills – all those types of things. That translates into confidence and going out and doing it during the game so we have some more time and I’m going to do some more.
Q: The Broncos took some shots at your quarterback. What do you make of all the noise and all the trash talk between games?
JE: It’s just noise. We’re focusing on what they do, not what they say. They’re a really good football team and we can’t afford to get into that game. We have to really just sit back and see what these guys do and go out and prepare for that instead of saying something. That’s what we’re going to do. We’re going to focus on the process, and the process is through the preparation. That’s what we do here.