Duran Harmon ” Its not about being the best, its about getting better” 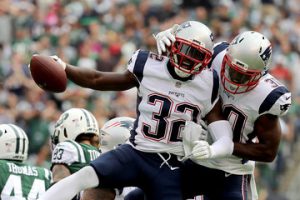 Q: What was it like last night after the game when you didn’t have to jump on a plane to travel back home like you normally would?

DH: Well, it was a good time. We bussed to Colorado Springs, of course. Everybody was excited about the win, having a good time on the bus. We got here late. We kind of just sat around and talked and had a good time. We talked about the game, talked about what we have to do this week because we know we’re going against a really good Raider team with an explosive offense. We kind of just sat back and relaxed. It was a good time to take a deep breath, have a little time to enjoy with your teammates and just enjoy the night.

Q: Can you contrast that to what it would be like if you had a normal trip home and how you would feel this morning?

DH: Well, you know, flying back from Denver is about a four hour flight so we probably wouldn’t have gotten back until like five or six o’clock in the morning and nobody would have gotten any good sleep. It would have made the week a little bit harder because you would’ve just been trying to catch up on sleep since you weren’t able to sleep after the game. Being able to stay out here has definitely helped from a rest standpoint, body standpoint, because we were able to get the rest immediately right after the game like we need to.

Q: What is it about this team that makes you so difficult to beat when you’re playing on the road?

DH: I would say it has to do with – I really believe in not making it bigger than what it is. Having some type of mental toughness to be able to go into hostile environments and just be able to focus on the job. When you’re able to do that and not get into the crowd or not get into all the other stuff and just do your job and play good football, play good complementary football, you’re allowed to win on the road.

Q: Was last night a statement game and do you think it makes you guys the best team in the NFL?

DH: I wouldn’t really say a statement game because the only thing we’re worried about each and every week is being a better football team than we were the week before and I think progressively over the season we have been able to see that especially defensively. We didn’t start out the way we wanted to but we’ve actually been making a lot of strides. It’s not about being the best in the NFL right now. It’s really about, like I said, just getting better, being better than you were the week before, trying to make constant improvement and being able to learn from the tape which allows you to be better next week. So we’re going to watch the tape this week, watch it today, learn from it and then try and get better and improve on areas that we weren’t as good at or where we want to be at.

Q: What is different defensively when it comes to playing in the red zone? How has the defensive unit been so good at limiting opponents to field goal attempts instead of touchdowns?

DH: Well, I would say the first thing is we talk about it each and every week. There’s good offenses in this league and at some point they’re going to be able to drive the ball and get into the red area and our focus is always just trying to make them get three. With the field being wider than it is in length, we do a good job of just knowing where quarterbacks and teams are going to attack us and we just try to take it away. We know stopping the run is probably the most important thing with that because a lot of teams if they can run the ball in then they’ll just run it in. It’s the easiest thing to do. So a real good job by our front because they’ve been able to really stop the run and make teams kind of one-dimensional in the red area. Our coverage has gotten a lot better over the year. We’re just making constant improvements and we’re going to continue to try and do the same because, like I said, everything won’t be perfect. As long as we keep trying to improve, though, we’re going to get better each and every week.

Q: How do you feel you performed in your role as a part of Rob Gronkowski‘s post-game press conference?

DH: You know what, when I saw it I wasn’t assertive enough. I’ve got to bring a little bit more to the table. My question – it wasn’t a good one. The next opportunity I get I’m going to make the most of it and be a little bit better”