Dombrowski is building his manager a Ferrari, but will Farrell know how to drive it?

Christmas came early for Red Sox fans as team president of baseball operations Dave Dombrowski pulled off the long-rumored Chris Sale trade with the Chicago White Sox, only hours after finding an eighth inning guy in Tyler Thornburg in a deal with the Milwaukee Brewers on Tuesday morning. Both deals cost the Sox some significant prospects – the biggest being the supposed superstar in waiting Yoan Moncada, and pitcher Michael Kopech, who was rapidly rising through their minor-league system – but in doing so, Dombrowski made his team the prohibitive favorites to win the World Series next season.

That is, if the manager doesn’t screw it up.

It has been a good couple of days for John Farrell, first on Monday, the team announced that his option for 2018 had been picked up by the club, and within 24 hours, he had the best left-handed starter in baseball dumped into his lap, and the answer to his setup man issues tucked firmly in his stocking three weeks before the big guy comes to town. All in all, not a bad turn of events for a guy more than half of Boston’s baseball fans wanted to see sent packing out of town after two consecutive last place finishes a year ago.

Now lets see if he knows how to utilize his new toys that were prematurely placed under his tree.

Sure, it is pretty difficult to screw up elite starting pitching – that is if you don’t take one of the hottest pitchers in the league who is having a breakout season and pitch run him at second base, effectively ending his year when he hurt his pitching shoulder diving into the bag – but managing a bullpen can be a little more complicated. By making the moves he did at baseball’s winter meetings, Dombrowski effectively gave his manager a pitching 101 for dummies handbook at the top of a very deep rotation and at the back of his bullpen.

Number them whatever way you wish, having Sale, David Price and Rick Porcello as a 1-2-3 punch at the top of the rotation, followed by your pick of Eduardo Rodriguez, the aforementioned Steven Wright, Drew Pomeranz, and possibly even Clay Buchholz; and you have a group of starters who even Butch Hobson could manage effectively. Follow them up with Thornburg becoming the bridge guy to closer Craig Kimbrel and the return of Carson Smith at some point next summer, and you have the back end of a bullpen that should be among the best in baseball. 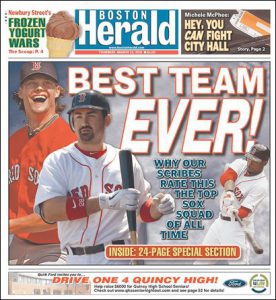 That is, if they are used correctly. Based on his track record of burning out the likes Junichi Tazawa and Koji Uehara in recent years, that is not a given for the Sox skipper. But then again, Dombrowski will tell you that in game management is not the most important thing to look for from your manager. I wonder whether he will believe that if one of his acquisitions has his arm hanging off in August because Farrell over used him early in the season.

For as optimistic Red Sox fans are, and should be, based on the moves the team has made regarding its pitching staff, the pressure that Farrell will now face next season has increased dramatically. There will be little room for error for a team that will have the highest expectations since the Boston Herald declared the 2011 club to be the best Red Sox team ever. We all know how that ended.

And while visions of shutouts will dance in the heads of Sox fans all winter, the true test of how well the team will perform comes down to more than simply rolling out what could be the best rotation in the American League, and slotting the relievers correctly in the bullpen. It comes down to how Farrell will deal with the vacuum in leadership created by the retirement of David Ortiz, and how that will affect the likes of Hanley Ramirez and the returning Pablo Sandoval.

It looks as if the Red Sox brass has built a potential wagon for 2017. Hopefully, their manager’s haphazard in-game decision making doesn’t drive it into a ditch.