(On the Philadelphia Eagles)
“They’re a good football team. They fly around, well coached, great athletes and good organization.” 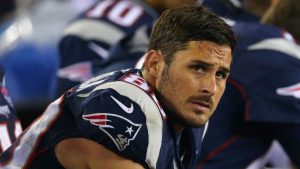 (On whether he remembers watching Super Bowl XXXIX)
“I do remember that. I was in college. I was a freshman in college. I think I was at my boy Phillip’s house watching Deion Branch ball out. I think T.O. [Terrell Owens] was coming off of an ankle surgery and it was a great game.”

(On what it’s like playing against former teammates)
“They’re good football players. LeGarrette [Blount] is a good friend of mine and Chris [Long] is one of my best friends so it’s going to be fun to line up against them and get going.”

(On whether he’ll put those friendships aside for a while)
“Yeah, what is the game – 60 minutes long or more? Yeah. We’re going to be trying to rip each other’s heads off I’m sure. Pretty natural in the NFL.”

(On Nate Solder and what he has gone through)
“Nate’s one of the best teammates I’ve ever been around and a guy who’s been through a lot on the field and off the field. He’s a guy that we all look up to and we all love to play with and have in our locker room.”