Danny Amendola comes up big in Title Game for Patriots

Q: The third-and-18 situation – can you take us through that particular play? Also, can you walk us through your two touchdowns? 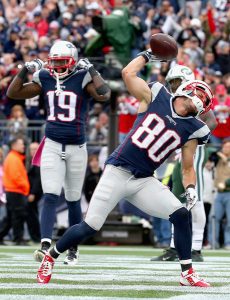 DA: The third-and-18 play, basically I think I had a little bit of an option route in the middle of the field and I saw that there was room. I had pointed out the line [to gain] before the play snap so I knew where to get to and Tom [Brady] had a laser and it was perfect. The two touchdowns: the first one, the go-ahead touchdown. It’ s a play we’ve worked on – I scored on it a couple of times this year, I think, actually. I have a crosser in the back of the end zone and Tom reads the first whip route on the left to ‘Cookie’ [Brandon Cooks] and then if he doesn’t have it then his eyes come to me in the back. We had it and it was a zone coverage. I obviously didn’t see what happened to Cookie on the first read and then Tommy had a great ball. I knew it was coming right by that ‘backer or safety in the back. It was a great throw.

Q: Your Patriots career was off to a relatively slow start. How does it feel to get to the point where you’re the No. 1 guy in the AFC Championship Game?

DA: I’m thankful for my opportunity here and what it’s been the last five years. I have a lot of great memories here. Any negative thing or anything that’s tried to hinder me, I try to ignore and focus on the positive things that have been going on in this building for the last five years for me. I’ve tried to build off that and be a good teammate and that’s the only thing I really focus on.

Q: It seemed like on your 20-yard punt return they kind of rushed the snap to get off a quick punt. Did that happen?

DA: I’m not sure. It was a quick snap. A lot of teams do that but I’m not sure what they were thinking. I believe we had a block on. We knew we were going to get pretty good field position. I think I was standing on the 40 or so and it was just about getting some yards.

Q: You had a lot of fair catches to that point…

DA: The punter was doing a great job all night of not out-kicking his coverage so to speak—kicking the ball high. I had my feet on the 10 a lot so I knew that he wasn’t going to kick it over my head and it was going to give him time to get down there. On that particular punt, I saw the rush. When you rush on a punt return, usually it holds the guys up even more. When they get out, they get scattered [and] they are not blocked. It just comes down to making a play when you get the ball in your hands, following a block or two or seeing any open space to get to. That was it.

Q: What did you notice from Tom Brady over the last week and everything that happened?

DA: Tommy’s the best. He’s the toughest guy I’ve ever met physically [and] mentally. If there is anything that happens to Tom, I know he can handle it. It was unfortunate to see him get injured mid-week. I know mentally it probably stressed him out a bit and physically I know it’s hard to throw a football with stitches in your thumb. Everybody knows how tough he is. Everybody knows that he’s our leader. It’s a testament to his career, his personality, the man he is. Not only is he the best player in our locker room but he gets everybody else to play well and step their game up and that’s why he’s the best.

Q: Do you feel any more internal pressure to step up when somebody like Rob Gronkowski comes out of the game?

DA: I don’t feel any added pressure, no. Every play I’m competing my tail off to try to win the route, win the block or whatever my job is on that play. Whoever is in the game, whoever is beside me, I have a lot of trust and faith in them whether it’s Gronk or Cookie or Hoagie [Chris Hogan]. Whoever it is, I know we have a lot of trust in this room.

Q: Can you talk about the Jaguars defense? They were playing so well, especially in the first half.

DA: Hats off to them. They played hard. We came out and we didn’t get many points on the board early. We made some adjustments at half. We wanted to come out and play faster, play more physical. We knew it was going to come down to the wire. They are a great team and they had a great season.

Q: When you heard that the double pass was called for you, did you get the sense it was ‘break open in case of emergency’ or ‘all hands on deck’?