Chiarelli’s inability to execute, has the Bruins on life support 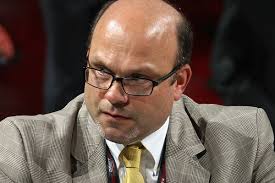 On Saturday, October 4th, Bruins general manager Peter Chiarelli announced that he had traded his number three defenseman, Johnny Boychuk, to the New York Islanders for two second round draft picks.  In explaining his reasoning surrounding the move, Chiarelli said, “It’s about making the team better now, tomorrow, the next day and the next day. Arguably, this doesn’t make us better now, obviously, but it’s something, when I look at it in a series of steps, I think it was the right move.”

Is anybody else still curious what, if anything, was the next move he had planned?

Just prior to saying that the trade was the first in a series of steps taken to make his team better, he was asked how such a move would impact the players in his locker room.  The B’s boss said, “How does it impact our team? He was well liked, and I’m sure the guys are bummed and they’re probably a little bit bummed at me for doing it.”

A little bummed at you for doing it?  Talk about a massive understatement.  They were freaking pissed at you for doing it, and rightly so.  They could already see that you had failed to replace their top scorer from a year ago in Jarome Iginla, and now you had sucked all the life out of a room just before the season was to start, by sending one of your top three defenseman packing for a pair of draft picks.

Talk about a colossal failure to know your team.  As a general manager in the NHL that is your job.  Let’s face it, the dealing of Boychuk is not directly responsible for the pathetic position the Bruins now find themselves in, it is just another in “a series of steps” that has taken a team that was built on trust in the system and trust in the room, and turned it into the hot mess that it is today.

Blame the salary cap all you want, but it is Chiarelli who has made the call on the contracts that now have his team by the throat.  Not only that, other than Tyler Seguin and Dougie Hamilton – that were dropped on his lap by the hockey gods and Brian Burke – name for me a Chiarelli draft pick that has even threatened to crack the NHL lineup since he took over in May of 2006?

It is far too early to say what David Pastrnak will be, but even if he turns out to be a top line talent, that record of screwing the pooch on draft day is a major reason why the Bruins are where they are today.  And the last time I checked, the guy with his name at the top of the masthead when it comes to being responsible for the draft, is Peter Chiarelli.

The list of crimes against Bruins Nation committed by Chiarelli is starting to grow exponentially.  Whether you want to point to the silly overpay extensions handed out to the likes of Chris Kelly (4 years, $12 million), Brad Marchand (4 years, $18 million) and Milan Lucic (3 years, $18 million), or the overly optimistic deal given to Zdeno Chara, that will be paying him as a top defenseman against the cap until he is 40 years old, Chiarelli has blood all over his hands when it comes to the cap hell the Bruins are in.

Then, following the team’s early ouster at the hands of the hated Montreal Canadiens, the B’s GM basically threw his fourth line – and Shawn Thornton specifically – under the bus saying that the league was “trending away from the style” that the former “Merlot line” brought to the team.  He was then content to bring back the weakest two thirds of the line – Daniel Paille and Gregory Campbell – while letting walk what his team now needs most, character and grit, by allowing Thornton to sign with the Florida Panthers in the summer.

Puzzling, is it not?

Look, the fact of the matter is that Chiarelli – and the Bruins as a result – has lost his way.  He has taken a team that was once feared around the league and de-clawed it.  The Big, Bad Bruins have been replaced by a team that cowers from conflict.  The team that once beat you with on the scoreboard, in the corners, and with their fists, can’t even hold a 3 goal lead on the road against the Calgary Flames.

The identity of the Bruins was slow to leave, but there is no doubt it is gone.  The departures of Nathan Horton, Andrew Ference, Thornton, and Boychuk, to name a few, has slowly reduced a team that played for each other, fought for each other, and won with each other, into a bunch of guys who watch their 170 pound, 5 foot nothing, 18 year old rookie on the rise, take a blatant elbow to the head and they chose to do nothing about it.

Face it B’s Nation, Bruins hockey as you have come to know and love it no longer exists.  No matter what moves Chiarelli makes before the trade deadline of March 1st, it  will not change that for this season.

The move to trade Boychuk at the beginning of October sucked the air out of a team many thought could make a serious run at a Stanley Cup this spring.  Instead, his team is on life support, while fans breathlessly wait for the next step they were promised almost 6 months ago.

Don’t look now Peter, but your team is a mess and the fans are almost out of breath.  It is time to implement that plan you said you had back in October.  That is, if there is any plan at all.