Celtics show they can hang with the best!

What it means for the C’s:

The Celtics can hang with anyone. Golden State is the best team in the NBA by an unreasonable margin and possibly the best basketball team ever assembled. The Celtics had them off their game and against a wall for roughly 55 out of 58 game-minutes.

The C’s committed key turnovers late in the game that led to crucial buckets for the Warriors—the inevitable hallmark of a young team lacking a true point guard. On the other hand, the Celtics forced mindless errors out of the defending World Champs down the stretch with their relentless, 4th-ranked defense. Steph Curry, the best ballhandler in the game, stepped out of bounds twice to give Boston two extra chances to end Golden State’s perfect run. At that point, they had the league’s most unstoppable offense taking desperate shots, eschewing brilliantly composed, tried-and-true offensive sets for the sort of tit-for-tat game that’s usually far beneath the Warriors. 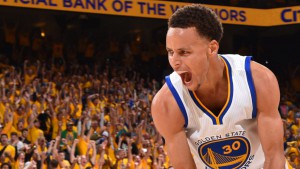 Curry’s stat line (38 point, 8 assists, 11 rebounds) might suggest otherwise, but Avery Bradley did a superb job limiting the un-shutdownable reigning MVP. He fouled out late on the tickiest, tackiest of fouls—par for the course, unfortunately, for Bradley. His effort against Curry was one of the most exciting one-on-one matchups we’ve seen so far this season, and it was a shame to end it prematurely. But even Tommy acknowledged that the bad calls affected both teams. Curry spent much of the third and fourth quarters on the bench after the officials incorrectly counted his fourth foul as his fifth. Still, Bradley had enough time to prove he’s one of the league’s elite perimeter defenders on a team full of them—and to think, we’re still awaiting the return of Marcus Smart. As far as the Celtics’ already stifling on-ball defense is concerned, the best days have yet to come.

Kelly Olynyk (28 points, 6 rebound, 3 assists) is blooming into a pro. It’s too early to accuse him of playing NBA-level defense (despite 3 steals and a block last night), but he’s proving himself as a legitimate offensive weapon with a deep arsenal, and isn’t that why Danny drafted the ex-Zag? His jumper was sound from day one, but his ability to create his own shot from outside, penetrate and score in the paint is a new and exciting development. Keep watching those Nowitzki tapes, big fella.

The Celtics may be starless, but they’re deep. We’ll see how the numbers shake out at the end of the season, but so far, Golden State’s depth seems to separate it from the 1995-96 Chicago team to which it is often compared. The C’s hung with them at every stage of them game, whether the Warriors went big with Bogut up front and Iguodala running the point, or stayed small and quick with three guards on the floor. Brad Stevens has a versatile and willing crew at his disposal, which affords him a ton of flexibility for in-game adjustments, even against the best team in the world.

Reality check:
While the league is (hopefully) trending toward an era where teamwork, ball movement, hustle and locker room chemistry are king, we’ve yet to see an NBA champion—or even an Eastern Conference champion–comprised entirely of role players. Isaiah Thomas and Avery Bradley have outside shots to be named all-stars come February, but they are both, at best, “1-A”-type players (and even that is a stretch). This team will go only as far as its grit and basketball intelligence takes it until it has a legitimate #1 option.
The end-of-game isolation play should have left town with Doc Rivers and Paul Pierce. Stevens is an outstanding basketball mind and Thomas is, for a shoot-first point guard, an excellent decision maker on offense. But how much basketball IQ does it require to recognize the fatal error of isolating your 5’6” point guard in the waning seconds of a one-possession game? If they were too turnover-shy to swing the ball or run a play, they should have run the iso for Evan Turner—aka Paul Pierce Lite—instead.

Speaking of Thomas: The pint-sized guard is having a career year and has demonstrated since the day he was acquired every trait you’d hope to find in a Celtic and a team leader. More importantly, he’s their ONLY go-to scoring option, the one guy on the roster capable of taking over a game and scoring at will—except when the game is on the line. He’s simply too small to be counted on when an opposing defense can direct its entire collective effort toward blocking the shots it knows Thomas will take down the stretch. If Thomas draws too much defensive heat during the meat of games, he can always dish it off, pull it back or create another opportunity. But with the game winding down, his size makes him a liability on both sides of the court. Teams attack Thomas on defense because he’s always mismatched, and all the creative ballhandling in the world won’t shake patient defenders like Shaun Livingston in the finals seconds of games. The Celtics will eventually need to supplement Thomas’ offensive prowess with another capable—and preferably much larger—scorer if they want to contend for real.

Are the Celtics really the best team in the East? Ask me again when Kyrie Irving returns to Cleveland. Still, it’s hard to imagine them falling to anyone, including the defending Eastern Conference champs, in fewer than six games of a playoff series. The C’s hung with a historically great Warriors team that might go down as the best ever—not only hung with them, but made them extremely uncomfortable as they sought to preserve their unblemished record.

This should serve as a massive confidence boost for a team that has multiple first-rounders—one of which is almost certain to be a lottery pick—to either trade or look forward to developing next season.
It’s worth repeating, once again, how astoundingly, earth-shatteringly good this Golden State program is. It’s on another planet. To be clear: the Warriors never played down to the Celtics’ level last night; the Celtics played up to Golden State’s level. A double-overtime loss has never left such a sweet taste in my mouth.
As a Celtics fan, I’m most encouraged by the similarities I saw last night between both teams. The Warriors are winning—and winning at a historic clip—with a brand of basketball that emphasizes teamwork, ball movement, lots and lots of outside shooting, team chemistry and unselfishness in earnest (a variation on the perennially successful San Antonio model).

The Celtics and Warriors look like very similar programs at different stages of development. Golden State is in the middle of its Golden Age, and the Celtics are on the upswing. Early-season NBA games too often devolve into listlessness, but these two teams have been bringing energy to every possession, every game, all season long. Last night, they treated us to the game of the year. Perhaps in the future—maybe next year, maybe later—they’ll treat us to an epic NBA Finals.

But for now…on to Charlotte.