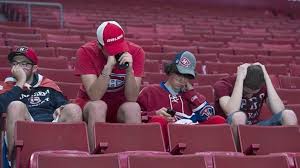 Flop and fail; that has become the standard that now defines the once proud Montreal Canadiens franchise.  For the 13th time in 21 years since winning their last Stanley Cup in 1993, the Habs have had the playoff door hit them squarely in their bloated behinds as they were bounced from the greatest tournament in sports yet again last night at the hands of the New York Rangers.

Twenty one years is a long time, especially for a franchise that would lead you to believe they invented the sport.  There are now Canadiens’ fans of legal drinking age that have never seen Lord Stanley’s challis in anything but fading pictures, old standard definition videos (more than half of which are in black and white), trips to the hockey hall of fame in Toronto, and that silly ceremony that takes place before every game in a city that hasn’t won a title since Bill Clinton was president, Jurassic Park was the biggest hit at the box office, and Beanie Babies were all the rage.

You got to love history, right?

For the Canadiens with each passing season without success their tradition of winning – one that was so deeply embedded in their franchise from their first Stanley Cup victory in 1916 up until their last Cup in ’93 – is now becoming more about ancient history than current day fact.

It is kind of sad when you think about it, isn’t it?  Then again, maybe not.

How the mighty have fallen.

In the past 21 season the once proud Canadiens have failed to qualify for the playoffs 8 times and when they have made it to the dance they have failed to advance further than the second round 11 out of their 13 appearances.

Perhaps that is the reason for articles like the one that appeared in the Montreal Gazette today by long time hockey writer Dave Stubbs (http://www.montrealgazette.com/sports/hockey/montreal-canadiens/Stubbs+shame+Canadiens+elimination/9890469/story.html) proclaiming a moral victory in yet another post season defeat.  For a franchise that used to use a calculator to tally their Stanley Cup victories it is pretty pathetic to think that they now see a loss in the conference finals as something to be celebrated.

In the Canadiens’ locker room there is a line from from the poem “In Flanders Fields” by John McCrae which was written in 1915, the year they won their first cup and it serves as the team’s motto.  It reads, “To you from failing hands we throw the torch. Be yours to hold it high.”

Unfortunately for the Habs and their fans the only use they have had for that torch is to set it to the cars they flipped over during a riot following another disappointing loss.

But it is not all bad news that surrounds the end of the season for the Canadiens, it frees up time for P.K. Subban (http://youtu.be/bK2EJhuHsl0) and Tomas Plekanec (http://youtu.be/5y6A8cHLCQE) to work on their acting skills.  A guy can’t play hockey forever, you know.

Surely Habs fans will lament the loss of goaltender Carey Price and issue the excuses of what could have been but the fact of the matter is they didn’t do enough to advance to the Cup finals and they probably shouldn’t have been in this position anyway if the Boston Bruins didn’t let their hatred for the Habs influence the way they played the series before.

Chin up Canadiens fans, there are always those old reel to reel tapes you can run to remember the good old days before compact discs, cell phones and this wacky thing called the internet (thank you, Al Gore) when you ruled the hockey world supreme.  And while you might not have been the best team in the league since Robin Williams dressed in drag to play Mrs. Doubtfire on the silver screen, you still have that snappy pre-game thing going for you.

By the way, what time are the car burnings taking place tonight?  I need to grab my marshmallows.