Buffalo loss is a microcosm of Bruins bizarre season 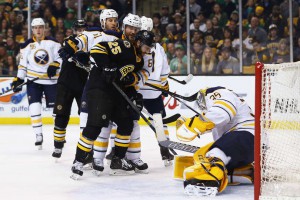 The bizarro world that is the Boston Bruins season continued last night at the Garden as the B’s lost in a shootout yet again, to the terrible and tanking Buffalo Sabres.  The weirdness began when it was announced that Bruins goalie Tuukka Rask was suffering from “general soreness” in the hours before the game, and it was revealed that Jeremy Smith was recalled from Providence to serve as Niklas Svedberg’s backup for the divisional tilt.

The wackiness continued in the first, as the Bruins netted their only goal at the midway point of the period on an Adam McQuaid drive that ricocheted off a Buffalo defender, hit the end boards, and sat patiently by the post waiting for Loui Eriksson to deposit it in the net.

That was the last time they would get lucky, however, as the Bruins turned goaltender Anders Lindback – who was traded to the Sabres from the Dallas Stars in February for the sole purpose of increasing Buffalo’s odds of winning the Connor McDavid/Jack Eichel sweepstakes – and turned him a vintage version of Patrick Roy.  The previously winless for his new team Lindback, turned away 44 of the 45 shots he faced, many of which were aimed squarely at the team’s crest on his chest.

Let’s face it, this Bruins team is downright maddening.  Each time you think that they have turned a corner and are beginning to gain some traction, they lay an egg of brontosaurus-like proportions like they did against the lowly Sabres.  This just in, the Bruins score about as often as Potsie Webber did at Inspiration Point back in the day, which, for those of you too young to remember, was not that often.

It is no secret that the B’s lack a finisher – insert the latest lament regarding the Tyler Seguin trade here – and that is not going to change anytime soon.  With David Krejci on and off the shelf several times this season, Patrice Bergeron has been asked to step into the role of a number one center for long stretches at a time.  And while Bergeron has performed well, he and the team are best served when he is manning the second line pivot, shutting down other team’s top lines and contributing opportunistically on offense.

But more troubling than the inability of general manager Peter Chiarelli to produce a top line right wing to replace Jarome Iginla, who was lost in free agency to the Colorado Avalanche last summer, is the quickness with which the underachieving group he has assembled gets comfortable when they shouldn’t be.

The stretches of good play we have seen from the team this season not so ironically coincide with the times that they have had the most heat applied to them. On January 6th,  the newly appointed CEO Charlie Jacobs called the team’s play “absolutely unacceptable”, and added that “we’re in a constant state of evaluation right now.”  The Bruins then proceeded to rip off 5 straight wins, and finished the month with a record of 9-1-2, prompting some to think that they were beginning to resemble the team many anticipating seeing at the start of the season.

Quickly, however, their false sense of security saw them drop 8 of 12 games in the month of February, and led to the consternation that gripped Bruins Nation as the trade deadline approached in early March.

Once again threatened by an unhappy front office and a fan-base approaching restless native status as February turned to March, the team once again tore off 5 straight wins and seemed to be turning the corner again at a very opportune time, with the playoffs a little over a month away.  Yet once again, they seem to have grown complacent, mailing it in in Washington Sunday night against the Capitals – in a game that could have vaulted the bus over the Caps in the playoff standings, no less – and failing to beat a lesser opponent in Buffalo at home last night.

The lack of urgency his team has shown has got to be driving head coach Claude Julien crazy.  Despite saying all the right things to the media, his players seem to think that they are better than they really are, and will flip a switch when the playoffs start in April.

I hate to be the one to break it to them, but teams that struggle to get even one player to the 25 goal plateau over an 82 game regular season rarely find that said switch, when it gets even tougher to score goals in the Stanley Cup playoffs.  Unless the newly acquired, then instantly injured, Brett Connolly morphs into Brett Hull when he returns in a couple weeks, the only flip switching that will be taking place on Causeway Street this spring, will be the turning out of the lights in the Garden after an early playoff exit yet again.

The Bruins aren’t who they think they are, and unless they realize it and soon, by the time they do it most likely will be too late.