B’s need to keep the train rolling into the playoffs 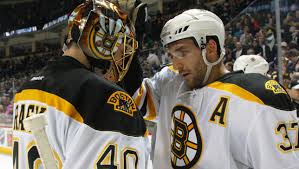 A quick glance at the Bruins’ remaining schedule following tomorrow night’s 2013 Stanley Cup Finals rematch at the Garden against the defending champion Chicago Blackhawks reveals just how difficult head coach Claude Julien’s job may be keeping the locomotive that is the Boston Bruins going with a full head of steam into the playoffs.

After tomorrow night’s clash of the titans on Causeway Street, the B’s play 7 of their 9 remaining regular season games on the road.  While they will play against teams fighting for their playoff lives in Washington, Philadelphia, Detroit and Toronto – with all but the second of two against Philly on the road – the level of significance in the standings for the B’s is decreasing with each passing day.

Keeping his team focused and resting key players down the stretch will be the biggest opponents Julien will face before the season starts for real the 3rd week in April.

Despite the number of critics who emerged following their lack of a major move at the trading deadline (Yup, that would include me. http://www.bostonsportsdesk.com/chiarelli-fails-at-the-deadline-bs-fans-real-losers-in-the-end/), the Bruins clearly have emerged as the team to beat in the East and perhaps the entire NHL.  If the B’s can put away the Hawks tomorrow night the way they have disposed of the teams they have played over the last month, it would not be a stretch to say that they should be the favorite to win the Cup when the second season starts in a little over three weeks.

While you can still question their depth at defense – one could argue that they have 4 third pairing D-men in their top 6 each night – their depth at forward and the tenacity at which they play the game at both ends of the ice is unmatched in the league.

Add to that Tuukka Rask playing like a guy who wants to be known as the best goaltender in the league and you have a combination that few teams can match in hockey.

For most teams in the league the stretch of games following tomorrow night’s tilt would present a problem.  Keeping focus while the games that really matter are still weeks away is a difficult thing to do, especially when you have enjoyed the success the Bruins have enjoyed since coming back from the Olympic break in February.  The B’s came into March like lions and as the month comes to a close they are playing like grizzlies.

This has been the product of a GM in Peter Chiarelli – who seemingly has the Midas touch selecting players that fit the mould of a Bruin – and a coach whose system holds his players to the highest standards night after night.  This Bruins team – more than any I can remember going back decades – functions like a group cold blooded killers (Except when they play the Canadiens, then they forget the cold blooded thing.), executing the game plan  night after night with such precision it makes Jason Bourne jealous.

The last 10 games of the season will certainly be a test of this team’s ability to keep their focus and carry out their mission of getting to the playoffs playing their best hockey.  Something tells me when the regular season ends that it will be a mission accomplished.