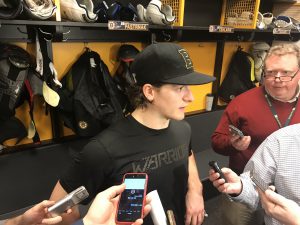 BROADCAST INFO: Today’s game will be broadcast regionally on television on NESN and on the radio at 92.9 WBOS Radio. It can also be live streamed nationally on the NESNgo app and on NESNgo.com. Puck drop is set for 5:08 p.m. ET.

BEHIND THE B: After today’s game, catch the latest episode of Behind The B on NESN at 8 p.m. ET. In this episode, Bruins Owner Jeremy Jacobs gets inducted into the Hockey Hall of Fame, a few players visit Hurley headquarters in Southern California, Charlie McAvoy is mic’d up for his game-winning shootout goal at New Jersey, and Matt Beleskey donates and delivers pies on Thanksgiving.

McAVOY PACES ROOKIES: Charlie McAvoy leads all NHL rookies in time on ice per game (23:25). He is the only rookie to average more than 20 minutes of ice time per game.

SZWARZ EMERGENCY RECALLED: On Saturday, General Manager Don Sweeney announced that the team has recalled forward Jordan Szwarz on an emergency basis and assigned defenseman Rob O’Gara to Providence. Szwarz is expected in the lineup today after Peter Cehlarik exited Friday’s game with a lower-body injury. The 26-year-old has three assists in nine games with Boston this season.

STRONG DOWN THE MIDDLE: The Bruins are 5-0-0 this season when both Patrice Bergeron and David Krejci are in the lineup. The two centers have both been active for the Bruins current four-game winning streak, as well as the team’s 6-3 win against Vancouver on October 19.

DeBRUSK HEATING UP IN NOVEMBER: After being a healthy scratch in the team’s game vs. Toronto on Nov. 11, rookie forward Jake DeBrusk has earned points in four of the team’s last five games (2g, 4a). He has also recorded 18 shots on goal and accumulated a plus-6 rating over that span.

MATCHUP HISTORY: The Bruins host the Oilers today for the first of two games between these teams this season and the Oilers’ lone visit to TD Garden. The Oilers won both games of last season’s series after the Bruins had taken points out of 16 straight games against Edmonton at 13-0-3.

349 AND COUNTING: Following their win vs. Pittsburgh on November 24, the Bruins have sold out 349 consecutive regular season and playoff games at TD Garden. Their last non-sellout was on December 2, 2009, when they hosted the Tampa Bay Lightning and drew 16,553.

OILERS NOTEBOOK: The Oilers are paced by 2017 Hart Trophy winner Connor McDavid (10g, 18a), who ranks seventh in the league in scoring… Edmonton leads the NHL with 663 hits… Adam Larsson ranks second in the league with 84 hits… Leon Draisaitl is two assists shy of 100 for his career… The Oilers enter tonight’s game having lost four of their last five contests.