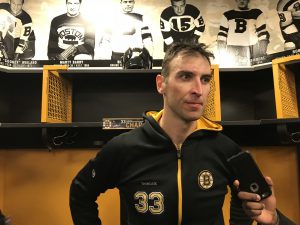 BROADCAST INFO: Today’s game will be broadcast regionally on television on NESN and on the radio at 98.5 The Sports Hub. It can also be live streamed regionally on the NESNgo App and NESN.com. Puck drop is set for 7:08 p.m. ET.

HOLIDAY TOY DELIVERY: On Monday, December 11, the current Boston Bruins roster will participate in the Boston Bruins annual Holiday Toy Delivery event beginning at approximately 1:30 p.m. (time subject to change based on team schedule). The Bruins will split up into teams and visit children at six Boston hospitals and deliver the toys purchased at the Bruins Holiday Toy Shopping event earlier in November. These toys will be given as gifts to over 600 children who are unable to celebrate the holidays at home. All of the toys being delivered at the Bruins Holiday Toy Delivery event were purchased through donations from the Bruins players, coaching staff, and the Boston Bruins Foundation. The players will visit Floating Hospital for Children at Tufts Medical Center (best media opportunities, 755 Washington St, Boston, MA 02116), Boston Children’s Hospital, Franciscan Children’s, MassGeneral Hospital for Children, Shriners Hospital for Children, and Spaulding Rehabilitation Hospital. Media wishing to cover the Bruins Toy Delivery event should contact Sarah McMahon (smcmahon@bostonbruins.com). Toys will also be delivered to Boston Medical Center, Lahey Hospital, and Home for Little Wanderers.

RED HOT RASK: Tuukka Rask has won his last three starts in net, and over his last four games has accumulated a 1.13 GAA and .951 Save %. Since earning a 3-2 win vs. Tampa Bay on November 29, Rask is tied for the league lead in wins (3) and paces all NHL netminders in GAA and Save %.

PASTA HUNGRY FOR MORE: David Pastrnak has earned points (4g, 4a) in seven straight games entering tonight’s game, which is the longest active streak in the NHL and the second longest of his career (11-game streak from Feb. 23 to March 16, 2017). The Bruins are 5-2-0 during Pastrnak’s current point streak, and the 21-year-old leads the team in goals (14) and points (25) for the year.

352 AND COUNTING: Following their game vs. Arizona on December 9, the Bruins have sold out 352 consecutive regular season and playoff games at TD Garden. Their last non-sellout was on December 2, 2009, when they hosted the Tampa Bay Lightning and drew 16,553.

ISLANDERS NOTEBOOK: The Islanders are undefeated when scoring first this season (10-0-0) and are 5-8-2 when allowing the first goal… They are also undefeated on Saturdays this season at 7-0-0… New York ranks second in the NHL in team scoring with 104 goals in 28 games (3.71 goals/game)… Mathew Barzal leads all NHL rookies in scoring with eight goals and 19 assists for 27 points… Josh Bailey leads the team in assists (26) and points (31)… Nick Leddy is tied for first among NHL defenseman in points with 24 (6g, 18a).