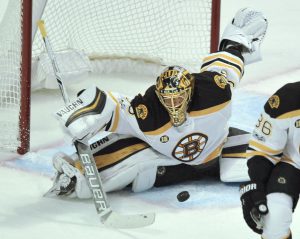 GIRLS HOCKEY DAY: The Boston Bruins will host the second annual Bruins Girls Hockey Day on Sunday, March 4 at TD Garden. The day’s events will kick off at 8 a.m. and will see over 400 participants from across New England skate on TD Garden ice for seven straight hours of hockey. Special guests throughout the day will include members of the Boston Blades, Boston Pride, and Bruins Alumni Andy Brickley and Tommy Songin. They will lead on-ice clinics as well as a Q and A session.

RICK ROLLING: Since being acquired by the Bruins, Rick Nash is tied for fifth in the NHL with 15 shots on goal in three games. The 6-foot-4, 220-pound winger has two goals and one assist in those appearances while averaging 16:31 TOI/game.

SQUAD GOALS: The Bruins set a season high with eight goals in their 8-4 victory over the two-time defending Stanley Cup Champion Pittsburgh Penguins on Thursday night at TD Garden. It is tied for the third-most goals scored by a team this season, with only Montreal and Chicago (10 each) scoring more in 2017-18.