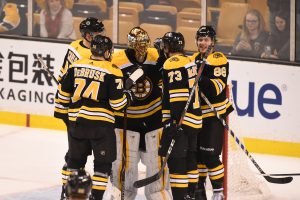 BROADCAST INFO: Today’s game will be broadcast regionally on television on NESN and on the radio at 98.5 The Sports Hub. It can also be live streamed regionally on the NESNgo App and NESNgo.com. Puck drop is set for 7:10 p.m. ET. 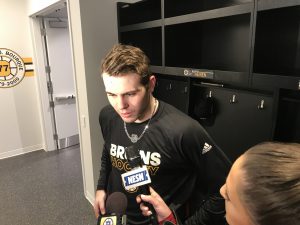 HOCKEY IS FOR EVERYONE NIGHT: The Bruins will host Hockey is for Everyone Night in support of You Can Play during tonight’s game. Hockey is for Everyone is a larger initiative that uses the game of hockey – and the League’s global influence – to drive positive social change and foster more inclusive communities regardless of race, color, religion, national origin, gender, disability, sexual orientation, and socio-economic status. For more information please see the accompanying release.

11th ANNUAL PJ DRIVE: The Boston Bruins are teaming up with Cradles to Crayons, Massachusetts Board of Library Commissioners and Wonderfund throughout the month of February to present the 11th Annual “PJ Drive” presented by Freihofer’s and Roche Brothers to benefit Massachusetts’ youth in need. The PJ Drive provides new, unused pajamas to babies, children and teens in communities across Massachusetts. Bruins Captain Zdeno Chara will lead this year’s PJ Drive for the third time. Over 100,000 Massachusetts children have received PJ’s through the Bruins PJ drive over the past 10 years. The Bruins will be hosting an in-game PJ collection drive at the TD Garden on Saturday, February 3 during their game against the Toronto Maple Leafs. Fans who donate a pair of new PJs at TD Garden or donate $10 to Cradles to Crayons will be entered into a raffle to win Bruins prizes.

CEHLARIK CALLED UP: Peter Cehlarik was recalled on an emergency basis on Wednesday and is expected to skate alongside Riley Nash and David Backes tonight. The 22-year-old forward has two points in five games with Boston, and 13 points in 17 games with Providence (AHL) this season.

ROOKIES ROLLING: Bruins rookies have scored 36 goals this season (23.4%), which is tops in the NHL. Arizona is second in the league with 31 rookies goals.

COMEBACK KIDS: The Bruins have allowed the first goal in each of their last eight games. However, the team has earned points in all but one of those games, compiling a 6-1-1 record.

MATCHUP HISTORY: The Bruins host the Blues tonight for the first of two games between these teams this season and the Blues’ lone visit of the season to TD Garden. The Bruins have taken points out of 10 of their last 13 games against the Blues at 6-3-4, and 10 of the last 11 games between these teams have been decided by two goals or fewer, including four OT/shootout decisions.

364 AND COUNTING: Following their game vs. Anaheim on January 30, the Bruins have sold out 364 consecutive regular season and playoff games at TD Garden. Their last non-sellout was on December 2, 2009, when they hosted the Tampa Bay Lightning and drew 16,553.

BLUES NOTEBOOK: The Blues are 24-4-1 this season when scoring first, tied for the most wins in the NHL… The Blues are third in the NHL with 2.52 goals against per game… 2018 All-Star Alex Pietrangelo ranks sixth among all defensemen with 35 points… Goaltender Carter Hutton leads the NHL in GAA and Save %, and has helped the Blues earn points in nine of his last 10 starts… Brayden Schenn leads the team in scoring with 21 goals and 29 assists.