Bruins to retire Rick Middleton’s #16 to the rafters

BOSTON – Boston Bruins President Cam Neely announced today, July 31, that the team will honor Rick Middleton by retiring his number 16 jersey prior to the team’s game against the New York Islanders on Thursday, November 29.

“It was a great honor to call Rick today and let him know that he will join the group of retired numbers in the TD Garden rafters,” said Bruins President Cam Neely. “As a player and a person Rick embodies what it means to be a Bruin, and we are excited to celebrate his career with his family, friends and our fans on November 29th.” 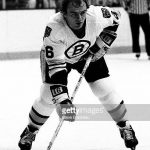 “Mr. Middleton’s number 16 has long deserved to be raised to TD Garden’s rafters,” said Bruins CEO Charlie Jacobs. “I look forward to participating in the events on November 29th as it will be a very special evening for Mr. Middleton and the entire Bruins organization.”

The 5-foot-11, 175-pound right winger led the Bruins in scoring four straight seasons from 1978-82 (tied Peter McNab with 40 goals in 1979-80), and also led the team in goals six straight seasons from 1978-84. He enjoyed his best season in 1981-82, when he was named a second-team All-Star after scoring a career-high 51 goals – joining Phil Esposito (5), Cam Neely (3), John Bucyk and Ken Hodge as the only 50-goal scorers in Boston Bruins history. Middleton also received the 1981-82 Lady Byng Memorial Trophy, awarded annually to the “player adjudged to have exhibited the best type of sportsmanship and gentlemanly conduct combined with a high standard of playing ability.”

Middleton helped lead the Bruins to postseason appearances in 11 of his 12 seasons. In his 114 career playoff games, he totaled 45 goals (including eight game-winners) and 55 assists for 100 points, tying John Bucyk for the third-most postseason points (100) in team history. He holds the NHL record for most points in one playoff series with five goals and 14 assists for 19 points in the 1983 Division Final vs. Buffalo. He is also one of just three Bruins players (Phil Esposito, 1969 and David Pastrnak , 2018) to ever record six points in a playoff game (Game 4 of that series).