Bruins should steer clear of Stewart 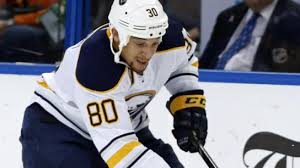 Due to the lack of an answer to the question of who is going to fill the right wing spot left open on the Bruins top line since the departure of the one and done Jarome Iginla on the B’s top line, the rumors have circulated regarding potential trade partners for general manager Peter Chiarelli.

When CSNNE’s hockey insider Joe Haggerty threw out the idea of the Bruins trading for the Edmonton Oilers star in the making Jordan Eberle on Tuesday, it was quickly shot down by another Bruins reporter, Matt Kalman of The Bruins Blog, in a series of sarcastic posts on Twitter.

Jordan Eberle makes $6 million through 2018-19. I think the story is another attempt to get picked up by @Deadspin.

Add $6 million to the B's core for next year, then how do you get Krug, Hamilton, Smith signed? Chiarelli is playing the long game. Wake up.

If you want to read a trade rumor that makes sense, you read the @TSNBobMcKenzie Stewart/Bruins report. At least it's a fit.

Now – as you can see in the above posted tweet by Kalman – the latest rumored target to take Iginla’s spot is the Buffalo Sabres free agent to be, Chris Stewart.  Reports from two sources that carry considerably more weight than Haggs, TSN’s Bob McKenzie and ESPN’s Pierre LeBrun, say that the sometimes power forward is indeed on Boston’s radar.

But based on his history of taking games off and not exactly excellent conditioning habits, I’m not sure he would be a great fit for the B’s.

When asked about the possibility of Stewart being dealt to the Bruins during his weekly appearance on WEEI’s Middays with MFB, NBC Sports Pierre McGuire said, “I’d be careful.”  He went on to say, “The Bruins identity is hard working, it’s in your face, it’s tough guy hockey.  He doesn’t do that.  That’s just…he doesn’t bring that every night.  If he brought that every single day I would say go get him.  But he doesn’t do that everyday and that’s why you’ve seen him move around a little bit.”

Whoa, that is something coming from a guy that normally passes out platitudes like candy bars on Halloween.  If I were Peter Chiarelli, I might just listen a little bit.

There is no doubt that Stewart possesses something the Bruins lack on their top line, and that is the ability to put the puck in the net.  Twice in his 6 year career he has scored 28 goals, and in his second season in 2009/10 in Colorado he posted a career high 64 points in 77 games.

But since then his production has been spotty at best and his conditioning has been called into question since before he was drafted.  In their pre-draft scouting report in 2006 Hockey’s Future noted, “One area of concern for Stewart was visible to scouts at the draft combine, and that was a body fat level that is too high.”

When asked about his weight entering training camp in St. Louis last season by Jeremy Rutherford of the St. Louis Post-Dispatch, Stewart was dismissive saying, “I think it’s overrated, to tell you the truth. When I got traded here from Colorado, I was probably around 245, and I finished with 16 goals in 25 games and no one had a word to say about it. So, I’m not really too worried about my weight. I have it under control and I feel comfortable anywhere from 230 to 235.”

He went on to under-perform again, posting only 15 goals and 11 assists in 58 games before being dealt to Buffalo for goalie Ryan Miller.

Sure the Bruins have dealt with his type before, Nathan Horton was a similar type player to Stewart.  Both are big guys who – when at their best – can mix it up with anyone as well as snipe with the best of them.  Horton too took nights off – sometimes weeks at a time in the regular season – but Horton was a big game player and when the playoffs came, he came alive.

He potted 6 game winners in the playoffs in his 2 seasons with Boston, including the overtime winner against Montreal in 2011 and the 3rd period strike against the Tampa Bay Lightning that sent the Bruins to the Stanley Cup Finals – which they would ultimately win without him due to a concussion he sustained during game 3 of the series courtesy of a vicious hit by Vancouver defenseman Aaron Rome – in 7 games over the Canucks.

Stewart on the other hand since lighting the lamp for 3 goals in 6 games in his first playoff experience in Colorado in ‘09/10, has underperformed in the NHL’s second season so much that his then head coach Ken Hitchcock benched him in St. Louis’ series with the San Jose Sharks in 2012.

Surely the Bruins will have to look outside the organization to get a goal scorer before the trading deadline next March.  It is well know that Chiarelli does not want to deal any of his core players currently on the roster in order to do so.  Even though is sounds as if Buffalo is willing to consider the draft picks the B’s got from the New York Islanders when the dealt Johnny Boychuk before the season in return for the reluctant right winger, the Bruins should stand pat until the trade market really opens up.

This deal doesn’t work because Stewart doesn’t work, at least not enough to fit into the Bruins style of play.  The bottom line is Chiarelli can and should do better, and if the Bostons’s brass really does have aspirations of playing for a Stanley Cup next spring, he will have to.