Bruins should look to rebuild for the long Hall 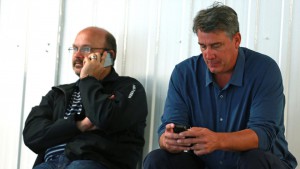 Earlier this week on Comcast Sportsnet New England’s Great American Hockey Show on CSNNE.com, hosts Mike Giardi and Joe Haggerty talked about the possible ramifications that could happen should the Bruins not make the playoffs this season. Amid the talk of changes in the front office and behind the B’s bench, Haggerty suggests that the Bruins should pursue a trade with the Edmonton Oilers for former first overall pick Taylor Hall.

First of all, it is pretty much a no-brainer – playoffs or no playoffs – that there needs to be a change to the general manager position for the Bruins. The number of overpaid players on the B’s roster is staggering, the latest to feed from the Peter Chiarelli gravy train is the under performing Reilly Smith, who inexplicably was signed to a two year, $6.85 million extension early in March. Instead of making him earn his future money down the stretch this season before he became a restricted free agent this summer, the B’s GM handed the unproven forward a contract worthy of an up-and-coming player, and in return, Smith regressed into the JAG that he truly is.

The Smith signing has been just the latest irresponsible contract that Chiarelli has inked in recent years that overcompensates one of the role players on his roster (See Dennis Seidenberg, Chris Kelly, Milan Lucic, Brad Marchand, Gregory Campbell, and Daniel Paille to name a few.), and is a major reason why the Bruins sit in salary cap prison as their season circles the drain. There is little doubt that new leadership is needed to steer the Bruins out of the dangerous ditch they are in, and get them back on the road to contention, while they still have their core of Zdeno Chara, Patrice Bergeron, David Krejci, Dougie Hamilton, and Tuukka Rask in place.

All of which leads to the talk surrounding Hall. If a deal for the oft-injured left wing can be had, the next general manager of the Bruins – hello, Don Sweeney – should pursue it with the vigor of a drowning man reaching for a lifeline. Hall plays the style of hockey that fits the B’s former modus operandi, a player who initiates contact and isn’t afraid to crash the net, a style that has likely led to his injury plagued past, but that Bruins fans would eat up like a bowl of ice cream on a hot summer day.

The talk of the Oilers trading Hall is not that far fetched. In December, when the Bruins were again in a swoon and trade rumors were running rampant; TSN’s Darren Dreger was quoted as saying, “I think that Boston is a team that is going to exhaust the rumors swirling around Taylor Hall in Edmonton. They’re going to find out, even through the summer, whether or not this kid can be pried out of Edmonton. And if he can be, then I wouldn’t be surprised in Boston is among those teams that takes a pretty good swing.”

Seeing that there is a very good chance that the Bruins will be among the teams swinging golf clubs in mid-April if they don’t qualify for the playoffs, now might be a good time to start limbering up to take a crack at the Oilers assistant captain.

Short of involving any of the above listed core members of the current roster, anyone should be in play to be included in a package to land Hall. As Haggerty said in the podcast on CSNNE.com, that package should be headlined by Milan Lucic.

Of course, Lucic alone wouldn’t do the trick. He is headed into the last year of his deal that pays him $6 million a year and likely will be looking for an extension if he is dealt. Malcolm Subban would be the most appealing chip the Bruins have to pair with the sometimes slouching Serbian, and most likely Edmonton would ask for the likes of a Torey Krug, Ryan Spooner, or David Pastrnak as well, in an expanded package that would include another Oiler coming to Boston in return. And while I would agree dealing Pastrnak or Spooner would be a bitter pill to swallow for the Bruins, the lack of success in the draft and bad contracts accumulated by the Chiarelli regime has put the soon to be new general manager in a position where he will be forced to swallow hard on multiple occasions during the rebuilding process.

Given the malaise that the team has been in for the better part of the 2014-15 season, there is little doubt that there needs to be a quantum shift not only in the Bruins front office, but in the locker room as well. The B’s new GM will need to define what direction he wants to go when it comes to the identity he wants his team to have, something that has been badly bungled over the last 18 months by his predecessor.

By adding Hall to the existing core, the Bruins will have a cornerstone piece to build upon for the next decade, something they thought they had when they picked Tyler Seguin right behind him in the 2010 draft.

Rarely does a franchise get a second chance to correct the error of their ways that was sending Seguin packing for the Dallas Stars for a vastly underwhelming return. If there is a chance to deliver Hall to Boston next season, the new Bruins GM should do what it takes to get the deal done.

If he doesn’t, the remarkable run this team’s core has been on for the previous five years or so, might just end before it should have.