Bruins rebuild has to start at the top; it is time to fire Peter Chiarelli 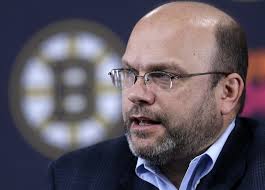 What a difference a year makes.  At this time last season, the Boston Bruins were a wagon, running over teams on their way to a league best 117 points in the regular season, and seemingly poised for another run at the Stanley Cup come spring.

The only question that they had was how they would fill the then sizeable shoes of defenseman Dennis Seidenberg, who was felled with a knee injury late in December of 2013.  General Manager Peter Chiarelli was tasked with filling the void on the B’s backend at the trading deadline, something he failed to do and something he and his team have never recovered from.

The best Chiarelli could do was add a press box patron in part-time defenseman/part-time spectator, Andrej Meszaros, in a deadline deal with the Philadelphia Flyers, which was a precursor to the train wreck that was to follow.  Exposed on defense, the Bruins bowed out early in the second round against their ancient rival the Montreal Canadiens, and they haven’t been right ever since.

Chiarelli’s losing streak continued into the summer.  First he pulled the plug on clubhouse leader/all around good guy Shawn Thornton, by not offering him an extension, then he was unable to resign his top scorer from a year ago, Jarome Iginla, due to the salary cap handcuffs he had placed upon himself.

To add insult to injury, even though his team was still viewed as one of the top contenders for the Cup in the East, he inexplicably dealt his then number 3 defenseman, Johnny Boychuk, for a couple second round picks to the now Metropolitan Division leading New York Islanders, to escape/further plunge himself into salary cap hell.

Hey Peter, wanna get away?

If the truth be told, Chiarelli may just be heading on a long vacation, albeit not one of his own choosing.

Face it Bruins fans, your team is screwed.  And things only got worse when top line center David Krejci suffered what seemed to be a knee injury on Friday night against the St. Louis Blues.  Suddenly a team looking for a quick fix is on the precipice of going full rebuilding mode, and becoming sellers at the trade deadline.

The question for Bruins ownership and team president Cam Neely now becomes, who do you want as the architect to develop the plan to rebuild the once proud Big, Bad Bruins?  The answer should not be Peter Chiarelli.

Sure the Bruins won the Cup in 2011 and made a Finals run in 2013, but they did so largely with a team that the B’s GM inherited when he came on board in May 2006.  Of his so called core players – Zdeno Chara, Patrice Bergeron, Milan Lucic, Brad Marchand, and Tuukka Rask – all were either signed, drafted, or traded for before Chiarelli became general manager of the team.

Since taking charge of the Bruins draft board in 2007, Chiarelli has failed to produce even one player – other then Tyler Seguin and Dougie Hamilton, who were gifts dropped on his lap from the ill-fated for them, Phil Kessel deal with the Toronto Maple Leafs – that have contributed one bit to the big club, which is a big reason why the B’s find themselves wallowing in the mire that is their current state of affairs.

Lest we forget, as well, one of Chiarelli’s first moves as general manager was to sign the immortal Dave Lewis to a 4 year contract to coach his team, a deal that cost Bruins ownership 3 years of salary for zero in return, and cost Bruins fans a year of hockey they never will get back.

And while Chiarelli seemed to have the Midas touch in trades and free agent signings – signing Thornton in ’07, while trading Mark Recchi in ’09 and for Chris Kelly and Rich Peverly in ’11 – he has since been unwilling or unable to make the right move to improve his team whether it be in season via trade, or in the summer via free agency.

But his mismanagement of the salary cap may just be the magic bullet that takes down the embattled executive.

The Bruins are at a crossroads, and Neely and ownership know it.  The will have to make hard decisions on who exactly are their core players moving forward, and who they should look to deal at the deadline and the offseason.

Other than goaltender Tuukka Rask – for no other obvious reason than there is no one head coach Claude Julien has been willing to trust between the pipes since Thanksgiving – there should be no one that is untouchable.  If I were Neely, I would instruct Chiarelli to put the rest of the league on notice that there is a proverbial yard sale taking place on Causeway St., and he should run all offers across Neely’s desk for final approval.

Hard times call for hard decisions, not the least of which will be what to do with aging captain Zdeno Chara this summer.  If you are the Bruins, do you really trust those decisions to be made by the man that took you from being considered a Cup contender last fall, to a team that is looking to rebuild some 6 months later?

The answer, of course, is a resounding no, and the sooner the Bruins make the decision to move on the better.  Make no mistake, the Boston Bruins are in rebuilding mode, and that rebuild should start from the top by relieving Peter Chiarelli from his general manager’s responsibilities.