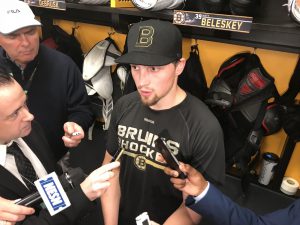 PROJECTED STARTING GOALTENDERS: Tuukka Rask (2-4-2, 2.70 GAA, .905 Save %) vs. Devan Dubnyk (4-4-1, 2.81 GAA, .913 Save %). Rask is 2-3-1 with a 1.96 GAA and .937 Save % in six career games against the Wild. Dubnyk is 2-5-0 with a 3.42 GAA, .900 Save % and two shutouts in seven career games against the Bruins.
BROADCAST INFO: Today’s game will be broadcast regionally on television on NESN, as well as on the radio at 98.5 The Sports Hub. It can also be live streamed regionally on the NESNgo app and NESNgo.com.
MILITARY APPRECIATION NIGHT: Tonight, the Bruins will honor local military members, veterans, and their families at Military Appreciation Night. To show their support for the armed forces, Bruins players Noel Acciari, David Backes, Brandon Carlo, Torey Krug, Kevan Miller, Tim Schaller, and Frank Vatrano will each purchase $2,500 worth of tickets to tonight’s game to give to local military members and their families. The military members and families who sit in these player-donated seats will have the opportunity to meet the players postgame. In addition, Patrice Bergeron has donated his suite to families who are involved with the Tragedy Assistance Program for Survivors (TAPS). The entire Bruins team will wear camouflaged Spoked-B jerseys for warm-ups and will use American flag and Canadian flag stick tape during the game to show their support for Military Appreciation Night.
POW/MIA CHAIR OF HONOR: On April 11, 2013, TD Garden unveiled a ‘Chair of Honor’, a seat dedicated to the soldiers of the U.S. Armed Forces who are POW/MIA. The black seat, emblazoned with the POW/MIA logo, remains permanently unoccupied as a remembrance of the more than 92,000 military personnel who are prisoners of war, missing in action or unaccounted for since World War I.
MILITARY BABY SHOWER: Yesterday, the Boston Bruins and March of Dimes teamed up for the third year to throw an educational baby shower for more than 45 military moms and dads to-be at the UMASS Club. Kelly Backes, Victoria Beleskey, Stephanie Bergeron, Julie Cassidy, Melanie Krug, Haley Miller, and Juliane Pandolfo, wives of current Bruins players and coaches, attended to help pass out gifts and mingle with the moms and dads to-be. Attendees received the latest pregnancy and newborn health information from the March of Dimes Mission: Healthy Baby® program along with gift boxes filled with baby supplies.
O’GARA RECALLED: Sweeney also announced today that the team has recalled defenseman Rob O’Gara from Providence. O’Gara appeared in Boston’s game vs. Buffalo on Saturday, October 21, and has produced two assists and a plus-four rating in seven games with Providence in 2017-18.
MATCHUP HISTORY: The Bruins welcome the Wild to TD Garden for the first meeting between the two teams this season. Boston is 6-13-1 all-time against Minnesota, and the Wild swept last season’s series with goaltender Devan Dubnyk earning shutouts in both games.
346 AND COUNTING: Following their game vs. Washington on November 4, the Bruins have sold out 346 consecutive regular season and playoff games at TD Garden. Their last non-sellout was on December 2, 2009, when they hosted the Tampa Bay Lightning and drew 16,553.
WILD NOTEBOOK: The is the first game of a season-long four-game road trip for the Wild, who just finished a season-long six-game homestand… Jared Spurgeon paces Minnesota in points (9) and assists (7) this season and has one goal and three assists in his last five games… Ryan Suter leads the Wild and is sixth in the NHL with 26:17 time on ice per game… The Wild lost 2-0 at home against the Blackhawks on Saturday, and have not suffered back-to-back regulation losses this season.
SPECIAL TEAMS: Bruins power play: 12-for-43 (27.9%, 4th NHL), Bruins penalty kill: 40-for-46 (87.0%, 4th NHL)… Wild power play: 7-for-40 (17.5%, 18th NHL), Wild penalty kill: 37-for-46 (80.4%, 19th NHL).
Kevin Harriman
Permalink
Bruins
Bergeron, Bruins, Krejci, Marchand, Military, Rask, Wild
No comments
654
0
0