Bruins lose in shoot-out to TB 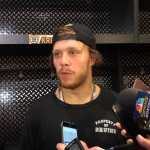 Bruins Fall Just One Noodle Short On National Pasta Day in a Battle of Top Lines
On Thursday night two of the best top lines in the Eastern Conference gave us a show to watch as they battled to the final shot in a heavyweight matchup.
“We’re both very offensive-minded teams that have firepower,” said G Tuuka Rask.
Regulation Recap:
With the two best top lines in the entire NHL squaring off, we knew tonight’s Bruins vs. Lightning matchup would be a fun one to watch. Early in the first, Brad Marchand sent a laser past Lightning G Andrei Vasilevskiy that hit the post hard enough to sent the sound of ringing iron through TD Garden.
It was the Boston Bruins who got on the board first as David Pastrnak added to his incredible week by scoring the last five straight for the team. Pastrnak notched his seventh goal of the season on what was actually National Pasta Day. Pastrnak’s goal was assisted by Patrice Bergeron on a nifty top-shelf score by the top line.
The Boston top line featuring Marchand, Bergeron, and Pastrnak dominated most of the first period. “Most” in this sense is quite literal. Lightning top line member Brayden Point scored his third goal of the season with just 0.6 seconds left in the first period. Where else have we seen last-second goals hurt the Bruins before? Game 7 of the 2019 Stanley Cup Finals.
Midway through the second, it was Patrice Bergeron who added to his previous assist with a goal of his own. Assisted by Marchand and Pastrnak, the top line looked to be rolling. Back and forth they would go as Mathieu Joseph would score almost immediately to tie the game for the Lightning.
Who but “Pasta?” David Pastrnak’s sixth goal in two games would tie the matchup after a Tampa Bay goal by Kevin Shattenkirk had given the Lightning a short lead. To overtime, we went.
Overtime/ Shootout:
An incredible back check from the birthday man Jake Debrusk denied Steven Stamkos a late goal. Late in overtime, Bruins Sean Kurally led a three on one surge as he was just wide, hitting the iron as nothing would prevail for either team. To a shootout, we went.
It was a scoreless shootout until the fourth round when Tampa top liner Steven Stamkos finally found the back of the net. A Jake Desbrusk shot attempt would then be saved by Tampa’s Andrei Vasilevskiy to end the shootout.
Locker Room Sounds:
After the game head coach Bruce Cassidy addressed the media. A big question? How the late first-period goal affected the outcome. “It’s like a hill mary. It can’t happen. It makes a big difference,” said Cassidy. Bruins D Torey Krug added to that saying “It changes the dynamic and complexion of the game. That’s a goal that we cannot let happen.”
It wasn’t all pessimism for the Bruins as most players gave credit where it was due but also reflected the chances were there for Boston to win the hockey game. “It’s so early, their a great team. It’ll make for some interesting games down the stretch,” said Krug.
Superstar David Pastrnak added to that saying “I wouldn’t make a big deal out of it. Shootouts are always 50/50. We had chances but we just weren’t able to capitalize.” Defensemen Charlie McAvoy adding to the narrative by saying “We just gotta keep pushing and try to make mistake-free hockey [moving forward].”
The Bruins fall to just 5-1-1 on the young season and will look to avenge tonight’s tough loss on Saturday against rival Toronto.
Kevin Harriman
Permalink
Bruins
Boston Bruins, Bruins, David Pastrnak, Goal, PASTRNAK, scoring, shoot out
No comments
254
0
0