Bruins fans would be best suited to curb their enthusiasm for the regular season, entering the playoffs healthy is all that matters

With only hours remaining before the Bruins begin the 82-game grind that is the NHL’s regular season – the club whose fanbase’s expectations are through the roof despite newly extended head coach Bruce Cassidy’s inability to take advantage of have home ice in Game 7 of the Stanley Cup Final against the underdog St. Louis Blues – the cast of characters sporting the Spoked-B on their chests in Dallas against Tyler Seguin and the Stars on Thursday night, is largely the same group that saw a championship slip through their collective hands some scant three and a half months ago.

And while it is a bitter pill to swallow for Boston’s rabid rabble who live and die with their beloved Black and Gold, the Cup banner that most believe should have been being hoisted to the rafters of TD Garden tonight, will instead be the first for the Blues who simply physically beat up the Bruins last June on their way to the first Final’s victory for the franchise that embraced an inebriated Brett Hull sing “Gloria” to a crowd that is likely still hungover prior to the home opener on Wednesday night.

Not only is it a sobering fact for general manager Don Sweeney’s surprising squad that likely arrived at least a year earlier on hockey’s biggest stage last spring that they will be watching the team that was in line for the number one draft pick as late as last January skating Lord Stanley’s vaunted challis for one last time on the ice of the Enterprise Center on national TV from their hotel rooms in Dallas, there is another inescapable fact that even the most fanatic B’s supporter has to face for this coming campaign. 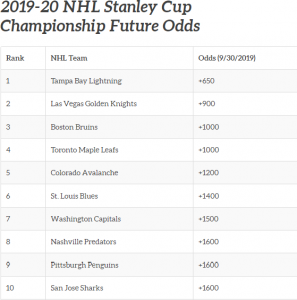 The diesel engine that continues to drive the Bruins – the core group of Patrice Bergeron, Zdeno Chara, David Krejci and Brad Marchand – has racked up pretty much the same amount of mileage as the newest 1950s vintage vehicle on the still communist island of Cuba.

While Sweeney certainly earned the honor of being named the NHL’s GM of the Year for his very impressive rebuild on the fly that found his club some 60 minutes away from the storied franchise’s seventh title last season by adding depth to his vaunted group of veterans, the fact remains Bergeron once again broke down in the playoffs.  Marchand suffered a thumb injury in a silly intra-squad game prior to the Final and Krejci turned into Casper the Ghost, recording a pitiful two points against the Blues.

The fact that defenseman/power play specialist Torey Krug led the team in scoring with six points in the series followed by bottom six forward Sean Kuraly with five, tells you everything you need to know about how the wear and tear of the regular season and the best championship tournament in North American professional sports reduced the B’s aging stars into a group of JAGS by the time the puck dropped at the Garden last June 12th.

And guess what?  They’re not getting any younger.

The truth is, the best thing that Cassidy and his crew can do to give his team the best opportunity to get back to the Final next spring is to ease off the gas as much as possible during the absurd 82 dates that the NHL demands from perhaps the most physically challenged professional athletes on the planet.

Home ice or not come the game’s second season, the Bruins will probably have to face the Tampa Bay Lightning, Toronto Maple Leafs, and/or the Pittsburgh Penguins or Washington Capitals to represent the Eastern Conference in the Stanley Cup Final next June.

If keeping his invaluable – and albeit nearly ancient core by today’s NHL standard – as fresh as they possibly can be after six months of the highest level of hockey played on the planet means a third place finish in arguably the toughest division in the sport today, so be it.

Without the healthiest version of this group of leaders can possibly be come the second week of April, their regular season record won’t mean a thing.

And no end of the season highlight reel will ever be able to change that.