ROCKLAND – The Boston Bruins Alumni Association took on the Ice Huggers Saturday afternoon at the Rockland Ice Arena to benefit the HugFoundation. (Hugfoundationma.org) 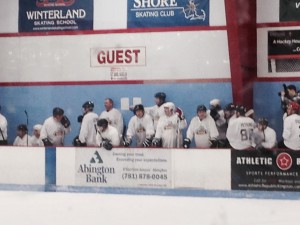 Governor Charlie Baker, Congressman Stephen Lynch, and Brockton City Councilor Shayna Barnes were among the dignitaries who participated in the game’s opening ceremonies.

Hug Foundation Chairmen Alex Bezanson was pleased with the turnout from Saturday’s event. “We had a tremendous crowd today. The support was terrific,” said Bezanson. “To put on an event like this is a lot of work. We had a great group of volunteers who put in a countless hours of time. I can’t thank them enough”. 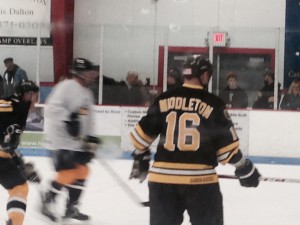 The Bruins Alumni squad are among the most active groups in the area when it comes to charity events and giving back to the community. This year, the Alumni squad will play more than 35 games in New England. For more information on upcoming games, go to www.BostonBruinsAlumni.com

“What can you say about the Bruins Alumni”, reflected Bezanson following the event.”We couldn’t do this without them. You saw today the following these guys have. Between the Alumni, the Rockland Rink and JP Ryans (Abington), we have a great group of supporters who believe in the Hug Foundation.” 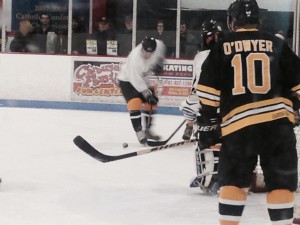 Bezanson estimates that Saturday’s event took in more than $25,000 which will help local residents who have fallen on hard times financially. To donate to the HUG (Help Us Give) Foundation. go to WWW.Hugfoundationma.org.