“ Britney Spears herself is a spectacle to be witnessed “ 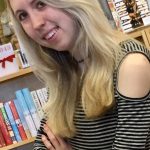 ​From the moment she emerged from the right side of the stage in what could quite possibly be the glitteriest body suit I’ve ever seen, Britney Spears brought her A-game with an extra helping of sass and sultry attitude to her Piece of Me tour. As the stage lit up with the staccato and commanding opening number “Work Bitch”, the crowd roared to life and her dancers flocked around her as the giant screen behind them flashed images of Spears, likely from the music video, punctuated by the constant beat of the electrified techno mix.

​This most recent leg of the tour came about as a response to the stellar reaction of the original installment of the tour, which began as a Las Vegas residency in 2017. Her ninth tour overall, the Piece of Me Tour aims to be a conglomeration of her hit songs, both old and new. A true testament to her entire discography and talent, the tour speaks volumes to both her sense of artistry and strong sense of personal branding and style. 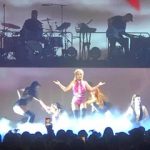 ​After playing other smash hits like “Womanizer” and the “Break the Ice/Piece of Me” medley, Spears almost imperceptibly disappeared backstage for a costume change, re-emerging only moments later with another sparkle-heavy ensemble and her flawless bright blonde hair tied back in a high ponytail.

​The next act consisted of the two songs I was probably the most familiar with, being “…Baby One More Time” and “Oops! …I Did It Again”, and seeing them live absolutely did not disappoint. I marveled at the way she artistically paired these older smash hits of hers with the visual effects of darkness and blood – in fact, the screen behind her portrayed an interesting display of clouds and dark fog moving around in the sky and environment like a foreboding night.

I still can’t quite make sense of what that significance would have been connecting with the school-girl irony of being “not that innocent” and playing with hearts, but it made for an entertaining spectacle, at least.

Perhaps it had something to do with laying aside of typical demureness for the more flamboyant and eye-catching qualities of danger, which is definitely something Britney embodies quite enthusiastically.
​After this section of the show, Britney treated the audiences to other sets with their own special effects, costuming, and dances, which functioned as a really slick and effective way to take the audience through a musical journey. The most notable moments of the concert ranged from the laser-light enhanced world featuring her popular collaboration with will.i.am known as “Scream & Shout”, to the Burton-esque creepy Big Top with her song “Circus” at the forefront, to my personal favorite – the poisonous jungle setting with her hit song “Toxic” as its crown jewel.

​The laser lights really added so much to the more techno-heavy set, as the face of will.i.am flashed across the main screen rivaling the protagonist of any high-tech science fiction box office hit. As “Scream & Shout” is one of her more recent songs (released in 2013), I enjoyed the way that she weaved this chart-topper seamlessly in with the other songs that were much older.

Everything that Britney does is so categorically hers, both stylistically and thematically, so this works really quite well.

​As the laser lights ceased and Spears disappeared for another costume change, the platforms which the musicians stood on in the shadows suddenly became striped in yellow and red, just like at the Big Top as the effects screen also mimicked the change in locale, instantly becoming a raised, black-and-white striped tent. Suddenly, Spears became the ringleader of her troupe, dominating the stage in every way. I really enjoyed this thematic change, and thought that the consummation of dance-pop music and the fun and excitement so present in a circus worked really well together.

​The theme that stood out the most to me was easily the poisonous jungle theme, which featured a hazy green fog and giant carnivorous plants lunging at unseen creatures on the special effects screen. The titular headliner of this set being the hit song and 2000s cult classic that is “Toxic” cut the slightly monotonous techno-pop beats of the other songs with its prominent violin and electric guitar riffs.

And as for the show, I appreciated the way that Britney slowed down the beginning of the song, transforming it from the catchy melodic hook that everyone knows so well to more of a laid-back, haunting nursery-rhyme xylophone that would likely be right at home in Wonderland.

​As the show inched closer to its inevitable end, the songs became even more high-octane and electrifying, as Britney treated the crowd to a very energetic rendition of her “Stronger / (You Drive Me) Crazy” medley, which felt like an anthem of positivity for anyone who has ever felt belittled by life and all its twists and turns (so basically everyone).

​Although I myself wouldn’t say that I’m a Britney super fan, I cannot deny that she is an extremely talented dancer and performer, and has seen more longstanding success than many other artists on the music scene. I hesitate to call her show a concert, as the word feels much too stuffy and relaxed to properly convey the experience that she crafts.

Rather, I would confidently state that Britney Spears herself is a spectacle to be witnessed rather than a show to be passively observed.

​Britney commands the crowd with a kind of gusto and energy unlike anything else – because she does it all while constantly dancing. I couldn’t imagine how she has all that energy, but it just goes to show that Britney is still at the top of her game, shows no signs of backing down anytime soon, and is probably planning to be “dancing ‘til the world ends”.