Brady ..There were a lot of throws I wish I would’ve made better throws on. “ 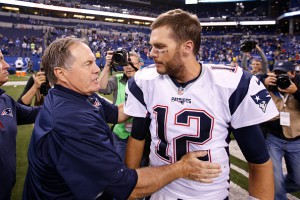 Q: Can you talk about the decision to slow the game down after they pulled ahead?

TB: Yeah, we had a couple of different modes trying to attack them, and they did a good job. They have a good defense. They rush well, have really good guys in coverage. They have a good scheme. They’re well coached. So there were a lot of challenges, and I think it took us a while. I thought we played better as the game went on, so it was good. We got a good turnover from our defense to start, and then it wasn’t great execution from us for most of the game. And then there in the fourth quarter we did a few different things and made some more plays, so it was good to win.

Q: What did you see on the 17-yard completion on third down in the fourth quarter?

TB: Yeah, Julian [Edelman] did a good job. He was running full speed at the safety, and he finally got the safety to turn his hips to run and then he … I was kind of reading Jules, and then Jules broke across his body and let it go. So, it was a good play. Jules made a real smart play. It’s not exactly how we drew it up. I think there were a lot of plays like that today that weren’t exactly how we drew it up. But I was glad to make some of those key plays when we needed to make them.

Q: How clutch was Danny Amendola when other receivers were struggling today?

TB: Yeah, we made the plays when we needed to make them. I think that was the most important thing, and sometimes we play this team and a lot of division teams that we play a lot and we’re familiar with, they had a lot of confidence with the things they were doing, as they should because I think they’ve been the top-ranked defense all year giving up 15 points per game. So they’re just tough. They put a lot of pressure on you with the scheme. I mean, our guys competed really hard. I wish we would’ve all executed better. .All the receivers, they want to make every play, too. So [we’ve] just got to do a better job with execution, and I have a lot of trust in all those guys and a lot of confidence in everything that they’re doing. So we’ve just got to try to do it better against Miami.

Q: Was not running the ball very much just a function of the game plan or the way that things were going? Is putting up 30 points on the number one defense a good sign for things going forward?

TB: Yeah, we definitely did some different things today. I think we adjusted a little differently than … We were just talking about things all through the week, about ways that we needed to attack them. And you’re right, we were down a couple of running backs, so it just turned out that way with the run game. And I wish we would’ve run it better when we had the opportunity. It was just more of a passing game for one reason or another.

Q: You actually led the team in rushing. What is your reaction to that? What did you see on that 11-yard rush on third down?

TB: I actually enjoyed this because it will probably never happen again. And then the third down play was … They had pretty good coverage, and I just saw a little seam. So, I just kind of rumbled toward the goal line, and it’s good when I have the threat of the ball in my hand because they’re not quite sure if they can go drill me or not. I just try to keep pump-faking as long as I can to keep them all at bay.

Q: Did a game like this tell you that the Patriots have too many weapons to be stopped?

TB: I just think there’s got to be different ways to win every week, and I think that our team has always tried to figure out ways to attack the teams. And you’re right, we were down some players. And every week you’ve got to adjust. Sometimes you’re down on offense. Sometimes you’re down on defense, and that’s the beauty of the season. It’s a long season, and you have 53 guys at one point who all need to make plays when they’re called upon. So a lot of guys stepped into some roles today, and like I said, we were installing plays this morning at the 11 o’clock meeting. So you just keep trying to churn your way through the week to figure out if you can make a bunch of plays, and we made some plays when we needed to in the fourth quarter. Like I said, it wasn’t exactly like we drew them up, but it was good that we made it happen when we needed to.

Q: When you completed a 19 or 20-yard pass to Brandon LaFell, the camera panned to you and you were fired up. What were you fired up over?

TB: It was just, I think the emotion of the game. It’s a great rivalry we have with that team and those players. We see them a lot, and I was pretty emotional like I am most of the time, so it was not a big deal.