Brady states the obvious, says nothing following loss in Miami

Opening Statement
“We just have to get better so I think this will give us the chance to evaluate where we are at and see the things that we need to do better as a team so we can try to win these games. It’s obviously a tough sport and you see where you’re at after 16 games and just keep fighting on.” 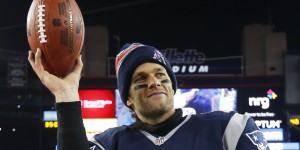 Was this 100 percent effort to win this game today?
“Absolutely. Yeah.”

Can you understand that some of your fans might have questions, it doesn’t look consistent sometimes that you don’t do the things you are best at or that you are trying to not get hurt?
“Yeah, we are trying to be effective and move the ball down the field and score points but we just aren’t doing a very good job of it. That’s what it comes down to. We’re just not doing enough on offense to be productive.”

Can you talk about the first half. We’re used to seeing this team come out fiery and not running the ball so much. Was the game plan coming in to pound it on them? You had 21 rushes to 5 passes at halftime.
“Yeah, I think that’s just the way things went. I wish we would’ve been more productive with whatever we chose to do. It just wasn’t a very good game.”

The idea was you liked what you saw with the Miami defense, that you might be able to run on them, was that the idea coming into the game?
“I think we always want to be balanced with what we do. Sometimes it gets out of proportion, pass-wise to run-wise and vice versa. We’re going to have to do both of those things well in a couple weeks regardless of who we play. We are going to have to run it well and throw it well. We know everyone’s going to have to contribute and take advantage of opportunities when we get them.”

What happened when you took that hit in the second quarter? It looked like you had your right ankle re-taped. Can you take us through what happened there?
“I didn’t see the replay so I’ll be anxious to see it.”

Anxious to see that low hit? Is that what you said, you’re anxious to see it?
“No, I just didn’t see it. I threw the ball away.” Read