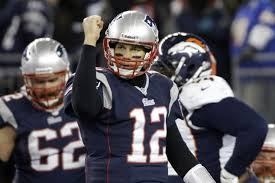 Wow, the fellowship of the miserable were in full throat today as the local sports talk show radio waves were filled with talk of the Patriots cutting ties with the best player in the history of the franchise, not to mention one of the greatest quarterbacks in the history of the game, sooner rather than later.

All for a second round pick out of Eastern Illinois who played his college games against guys who are now salesmen and accountants and in front of crowds that would be dwarfed by your local high school game on any given Thanksgiving Day?

And people say that I am negative.

It all started a couple days ago when CSNNE’s Tom Curran said on the Patriots centric show “Quick Slants” that “Tom Brady almost certainly will be gone before his four years is up.”

If you popped on 98.5 The Sports Hub’s Felger & Mazz program on your drive home tonight, you would have thought that the end of Tom Brady’s time with the Patriots was – like the object in your rearview mirror – closer than it appears.

Can we – as co-host Tony Massarotti so often likes to say – pump the brakes a bit here?  While there is no doubt that Brady’s days of guiding the Pats to AFC East titles the way crossing guard guide children back to school after Labor Day every year is nearing an end, one would be silly to jump the gun so soon and hand the reigns to his handsome understudy, Jimmy Garoppolo in as little as two years.

First of all, while Brady’s numbers have dipped a bit in recent years – especially when it matters most in the playoffs – one could easily argue that the dip was a direct result of losing key weapons on offense to injury, free agency and incarceration.  As for the team’s inability to deliver in the playoffs, anyone who has watched football for any period of time knows that it has been nearly 7 years since the Pats had a defense that could stop playoff caliber offenses.

Secondly, anyone that tells you that they know for sure what Garoppolo is after one camp and four pre-season games is either naïve, stupid or both.  Does anyone remember just a month ago when the kid was dropping snaps from center and throwing picks in practice with such alarming frequency that some were saying he could be a bust before he faced any other team but his own?

No one can say for sure just how much Brady has left or how steep his decline will be when it comes, but doesn’t it make sense to simply allow the situation to play itself out while you see what you have in Jimmy Football and maximize the waning days of TB12’s career by surrounding him with the best team possible on both sides of the ball?

Of course, there is heightened sense of insecurity surrounding the Patriots after Logan Mankins was needlessly jettisoned to Tampa Bay, weakening an already weak offensive line just to save some cash that has helped fuel the fire here.  If Bill would do this to a guy like Mankins, he wouldn’t hesitate to do it to a guy like Brady is the mantra that was used by those stirring the pot the most today.

Note to the defenders of Bill Belichick the GM regarding the Mankins trade:  Please do not give me the pathetic argument that the Pats did so to roll over the cap savings into next year to add flexibility.  One, they don’t have cap issues that would cause them to have to do that and two; they do it every year but never spend the savings.

This is what happens when the Red Sox suck down the stretch and the talking heads in the media need to find ways to fill the airways with four hours of sports talk.  They need to give people something to talk about to keep the radios tuned in.  Suddenly you have Tom Brady being sent out of town as soon as 2016 for an unproven kid from a small time school.

I got an idea, how about telling me exactly who is going to keep Brady upright long enough to find an open receiver instead of filling the airwaves with talk designed to send panic across Patriots Nation, OK?

As for the Brady departure stories, talk to me in few years.  If Garoppolo looks like he just might be the guy that takes the reigns after Brady is done, then you might just have a story.