QUARTERBACK TOM BRADY
Q: The offensive line obviously played well….What did you think of how those guys played, especially the young guys on the team?
A: Yeah, they played great and they’ve been coming together since the spring. It was a big challenge, certainly the crowd noise and the quality of the players we faced–I thought they were pretty great. They stepped up to the challenge and it was a great win.

Q: You’ve played in a lot of hostile environments, this game was hyped as a big game for Buffalo, this is the idea that we are finally going to settle the score with you guys, but to you guys, you’ve been in this situation so many times, does it matter at all when the crowd gets cranked up?
A: I think the execution is ultimately what it comes down to. They went down and scored to start the game and it was really loud there’s no doubt, we had to call timeouts the first drive, and I thought the good plays we made, I thought the screen ball to Gronk, our first touchdown drive was a big play. I think big plays settle them down a little bit. We had a lot of good plays but I think we left a lot of plays out there. It’s a good team, great defense, a tough place to play, and it was a great win. Great to be 2-0. Read
Q: After their first drive it looked like you weren’t going to get any plays in all day and then the next time you get the ball and make some plays and it’s all kind of behind you, is there an element to that? Not to say giving away that first drive, but just not panicking.

A: Sure, you’re calling plays hoping to go out there and execute them. You have a game plan and you go out there on the field and you see what happens and you make some plays and obviously the first drive we didn’t, it was tough, but then we came to the sideline and kind of settled down and then made a bunch of plays the rest of the game. The games not won in the first series, like you saw today, we came back at the end. We have a lot of games coming up against this team and they have a lot of good players and a good coach, this is a tough place to play but it’s great to be 2-0. Certainly to get a division win on the road is always huge.
Q: Tom were you totally comfortable running out the clock in the fourth quarter, passing the ball? A lot of teams would just run and try to run out the clock, that didn’t seem to be your attack at all.
A: Yeah, we threw the ball a lot, I don’t know if I’ve ever thrown it that much. 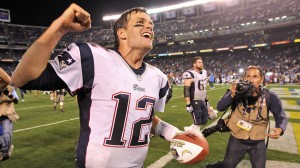 Q: Once.
A: Yeah, that’s what I thought- it was a lot of throws. There will be a lot of different ways to win and I think the big thing is to find a way to run and pass it. We went into the fourth quarter, the defense had intercepted balls and I thought a lot of our guys made a lot of great plays. Aaron Dobson stepped up, Dion [Lewis] is playing great, and obviously Gronk and Jules [Julian Edelman], Danny [Amendola] made a huge play, Steve [Gostkowski] kicking just clutch. Clutch plays on defense with very timely plays, Chandler [Jones] had a bunch of sacks–so it took everybody. We knew that’s what it was going to take and it’s a great feeling.

Q: Did you expect to go out there, I mean it was 466 yards for you, that’s the most you’ve ever had against them, it’s the most anybody’s had against them.
A: I mean we threw a lot. I think it took a lot of good execution and we made the plays. I thought we still left some plays out there. We’re trying to go out there and execute, I mean every play in practice, every play in the game, has to be the best we possibly can so like anything we learn from it, we take the good plays and figure out what we need to do better and start the clock to get ready for next week.