Q: Are you ever fearful you’re just cutting it too close?

TB: We’re not trying to give them those leads and certainly our execution wasn’t great, but we came through when we needed to. We’ve been playing 60 minutes all year. We’re 10-3. It was a great win.

Q: Not sure if you actually saw the hit on Rob Gronkowski

, but he took a vicious hit there.

TB: Yeah, he did. I don’t know what the circumstances are, but we’re all there with him. We love him and he’s a big part of this team. We’ll see where he’s at.

Q: Does that temper the excitement about the win at all?

Q: The league is trying to prevent high hits to protect players, but I know it’s hard for players to target below the waist. As a player that’s been in the league for a while, is there anything else you think you could do on that?

TB: You know, I’ve seen it all at this point. They make the rules and you try to play within them. You can’t hit in the head, so you’ve got to… Those guys, they’re lowering their target area. It’s unfortunate to see anyone get hurt. It’s a physical game and you hate to see guys get hurt.

Q: What’s going through your head on the onside kick recovery?

TB: It was unbelievable. It was a great – I came over to the sideline after we scored and Josh [McDaniels] said, ‘We’re going for the middle bunt.’ So I kind of stood up to get a good look and he kicked a perfect ball. That was awesome. You know, we work on that all the time and if it comes up once a year, great. If it works, I mean, it’s incredible. We got the PI [pass interference] and then scored on the next play and that was incredible. 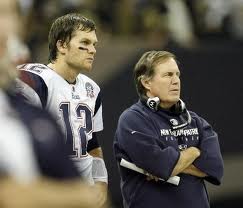 Q: Yeah, you still have to drive the ball down the field and score.

TB: Yeah, we did. We had a short field because they called the unnecessary roughness, so we were on the 40 and hit a play to Danny [Amendola] and then got the PI on Josh [Boyer] where he beat the corner, and then threw it in on the next play, so that was pretty awesome.

Q: It seems like we talk about mental toughness with you guys every week. Do you ever even surprise yourself with your ability to continue to come back in these adverse situations?