Brady meets with the media following OT loss to Broncos 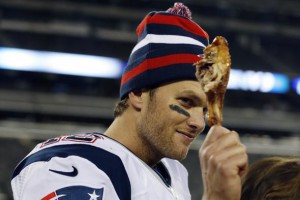 On last drive in regulation
“It was a great drive. A lot of guys made good plays. [K] Steve [Gostkowski] made a great kick. I was glad we had a chance. We ultimately didn’t make the critical plays when we needed to. We had plenty of opportunities out there and it just wasn’t our night. Read
On pass interference calls
I have no idea. They have meetings about it, but I have no clue.

On [TE] Rob Gronkowski injury
Yep, absolutely he has been through a lot. He is a tough guy. Hopefully it’s not too serious and our fingers are crossed.

On if he thought the hit on Rob Gronkowski was a dirty play
I hate to see it, but it really is the only the way defenders can hit now. I bet if you asked the players they would really rather go high than low. I don’t think it’s dirty I just think that is how football is played now.

On all the injuries to the offense
We will keep fighting. We lost tonight and it was a tough game. We had to come on the road and had a big lead and didn’t make enough plays in the fourth quarter. It is tough to win and when you lose good players its even harder.