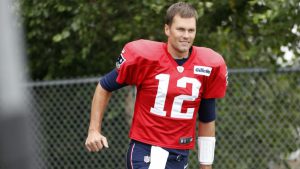 You had talked about having a higher level of competitiveness and attitude after last week’s loss to Kansas City. What did you see from the team in that regard?
“It was a good for quarters of great competition. We got off to a good start. We did some good situational things. We left some out there I think, but it was a good win. To be 0-1 with a 10-day break felt like a year, but it was good to go out there and get a win.”

You made some remarks last week about what was lacking in the Thursday night performance, were those elements in place this week?
“I think all the veterans had a chance to say what they wanted to say to their different groups, whether it was your own unit or your offense or defense or the whole team. The NFL is tough, every game is tough, every quarter is tough, every play is tough, and you can’t take it for granted. In order to win, you have to go out there and compete and compete as hard as you can on every play. We did a good job of that today and I’m glad it resulted in a great win for our team.”
Did you hear the chatter this offseason that the way to beat the Patriots was to play more man coverage defense?
“There’s a lot of different formulas. At this point, I’ve played a lot of different things. Man, zone, blitz, I mean everything. I think good defense is good defense and good offense is good offense. It comes down to a lot of individual matchups, winning them, and making the plays. Whether it’s man or zone, everyone has to be on the same page. If you’re going to get man, you better beat it, if you’re going to get zone you better beat it, if they’re going to blitz you better beat it. Otherwise, you’re just going to get more of it.”
Do you think you disproved that theory today because they seemed to be playing a lot of man against you guys?
“Yes, they played a lot of it. We made plenty of plays, but every team has different strengths. We play Houston next week and they have a certain style that they play. They will be confident in their plan. We go into every game with a plan and ways we want to attack other teams. It really comes down to our execution. If we don’t execute very well, everything looks good. No matter what you call on defense, if we aren’t doing the right thing and we aren’t making plays it results in no yards or negative yards and that looks good for the opposing defense. I’m glad we executed. There was a lot of tight plays and we made them. I wish there were more we would have made, but hopefully we can try to make that improvement this week.”
Can you talk about your trust with James White?
“(He makes) A lot of big plays. Every time he touches the ball it’s important. He is just so dependable, consistent, tough, and hardworking. He shows up to work every day to do his job as best as he can with the best attitude. He is team-first all the time and he’s just a great teammate. I’ve played with a lot of great teammates and James is right there at the top. I just love his effort and style. They have a great room, that backfield, and Ivan Fears does a great job with them. We got a lot out of the running back position today.”