Brady, Gronkowski lead Pats beat down of the Bears 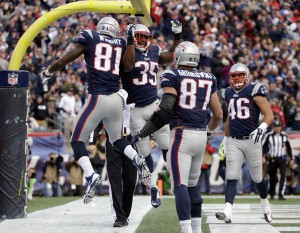 That wasn’t so hard now, was it?

Entering what many said was the meat of their schedule, the Patriots played as if they were famished against the Chicago Bears in Foxboro today.

After losing their best two defensive players to injury the last two weeks, and watching what everyone thought was their principle opponent for the supremacy of the AFC entering the season – the Peyton Manning led Denver Broncos who head to Foxboro next week – go off on the San Diego Chargers on Thursday night, a result which some said gave the Broncos the right to claim to the title of best team in the NFL right now, Tom Brady and his group of pissed off Patriots led by the legendary Rob Gronkowski delivered a back to the future beat down of the Bears.

What was easy to see today is much like Mark Twain, the reports of Tom Brady’s demise have been greatly exaggerated; going 30-35 for 354 yards and 5 touchdowns would count as a resurrection in anybody’s book.

Oh yeah and that Gronk guy is pretty good too.

First of all, let it be said that there is no better or bigger weapon on offense in the league than the Pats titanic tight end.  His return to form and the remarkable reworking of the offensive line have transformed the New England offense into the potential powerhouse that many thought they were before the season began.

Secondly, can we just put to rest once and for all the notion that Brady is too old, in decline and that somehow, someway the Patriots would be better served by dealing the once in a generation QB so a guy that played at a glorified division 1A school can take his place?  All of those who had TB12 dealt as soon as the trading deadline this year or questioned whether his considerable skills have diminished should take heed, its amazing what a difference it is when you have an offensive line that can keep the pocket clean for more than the snap of the ball, eh?

Oh, and based on his ball distribution today, it seems as if Brady has found himself another binky in wideout Brandon LaFell, he of 11 catches for 124 yards and a touchdown.  This could be great news for those who reside in Patriots Nation, as despite the performance of the defense against a Bears team that has clearly mailed it in this Sunday, will have to hope the offense remains highly productive if the Pats are to have any chance of competing for more than a division title this season.

After burying the Bears at home today, the Pats have shoved the worrying, woebegone words of wisdom down the collective throats of those of us who comprise the nattering nabobs of negativity that have surrounded the team since the start of the season.  The first hurdle in what looked like a gauntlet of games over the next month and a half has been easily cleared, but there is much work remaining to be done.

What remains in front of them is no small feat.  Denver – as was highlighted earlier in this spot – comes to Foxboro as the consensus best team in the league and Peyton Manning is sure to play better than the contemptible Jay Cutler.  The Broncos have shown the ability to run the ball at will and the Pats still don’t seem to have an answer when it comes to finding a way to shut down the running game.

While the offense seems to be finding its stride, the Denver defense is much improved and will certainly not lay down the way the Chihuahuas from Chicago did.

But perhaps the  most impressive point of the day was once again the Patriots have shown that they have the innate ability to rise to the occasion, especially in the face of adversity.  It has been the signature of the Brady/Belichick led regime of the last decade and a half.  When it comes to the regular season, these guys will find a way to win no matter what injuries occur or roster irregularities remain.

And if they play the way they played this Sunday against the Bears when the Broncos come to town next week, us nattering nabobs will have nothing to natter about.