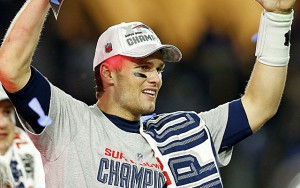 In the spirit of full disclosure, let me just say I think that these White House visits by championship sports teams aren’t worth the time it takes to type this sentence. They are a silly waste – only one of many that happen daily inside the Beltway – of taxpayers’ money, and they are rarely worth the minute and a half they get on the Worldwide Leader, or any other sports reporting outlet across the country.

That being said, if you are part of an organization that is extended an invitation to appear on the South Lawn with the President of the United States, you rearrange your schedule, even if your name happens to be Tom Brady.

The consummate team player, in the consummate team sport, played the role of the consummate A-hole, by choosing to decline the invitation by playing the “family obligation” card this week. By choosing to look down his nose at the invitation to spend twenty minutes of his life listening to the most powerful man in the world toss firecrackers at the feet of the most hated team in the country; Brady made himself the center of the story in what was, prior to his decision not to attend, a non-story of epic proportions.

There is no other way to describe what Brady did – unless there truly was a family illness or emergency, which this photo taken in New York the day after the trip would seem to dispute – as something he has prided himself throughout his career as never being, and that is selfish with a capital S.

If, as widely suspected, this is a political statement from a guy thought to lean to the right considerably, then it is downright weak. If the truth be told, I am actually of the same mindset as Brady when it comes to politics, even though – unlike him – I have to count every penny and watch where it goes every pay period.

Cool your jets, Patriots Nation puppets, if this was Ben Roethlisberger, Aaron Rodgers, Drew Brees, Russell Wilson, or gasp, Peyton Manning, you would be on your cell phones/keyboards – with your pitchforks in hand – ripping them from pillar to post on social media for making themselves the center of attention at an event that, quite frankly, doesn’t deserve the time it has gotten in this blog.

Listening to the excuse makers coming out of the woodwork for their cleft-chinned champion this week – I love the “the White House should come to Tom Brady” remarks, especially – makes it embarrassing, at times, to call the greater Boston area home. Being among the best to have ever done what Brady has done for a living brings a certain amount of benefit of doubt, no question, but the blind hero worship that goes on around this player, in particular, is simply over the top.

For anyone to suggest that Brady did not put himself above the team by this snub of President Obama is beyond ridiculous (for the record, I voted for Romney and Bush). He pulled the “I’m Tom Brady, what are you going to do about it?” card out of his pocket, and played it like a pompous ass.

If there was truly a life-altering family event he had to attend to – other than a family wiffleball game at his brother in-law Kevin Youkilis’ house he couldn’t miss – then just share it and be done with it. However, if he is unwilling to do so, he invites the criticism he is rightly getting now.

It is too bad, really. The story of the Patriots last second fourth Super Bowl victory – after being under the glare of hatred that was the still to be resolved “Deflategate” – was a middle fingered feather in his hat that Brady, and his team had to flash at the haters that reside in the championship starved region that is any place in the country outside of New England.

Instead, Brady decided to put himself above the team, and stayed home to presumably watch Kelly and Michael with Giselle and his kids in their flat in New York City. I guess the guy who has everything is above invitations to the White House. Let’s hope for him – and his teammates who seemingly didn’t deserve his time – this isn’t the last time he is extended one.