Bottom line is the Bruins need to play Pastrnak 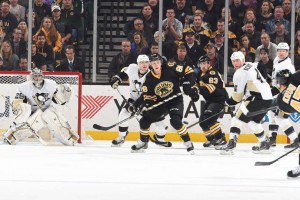 BOSTON – After having 2 goals disallowed by the referees at the Garden on Monday night against the Pittsburgh Penguins – both of which were correct calls and should not have counted, Patrice Bergeron for tipping in a puck above the crossbar and Carl Soderberg for knocking one in the net with his glove – the Bruins have fallen victim to their lack of goal scoring yet again and lost less than a minute into overtime when Sidney Crosby sent a cross ice pass to Evgeni Malkin, who teed it up and buried it past a sprawling Tuukka Rask.

Suffice it to say that the Bruins haven’t exactly been destiny’s darlings to start the season, the team’s list of wounded seemingly growing on a daily basis.  With captain Zdeno Chara sidelined with a knee injury adding to the thinning of the defense that began with the deal that sent Johnny Boychuk to the New York Islanders before the season started, and a nagging injury believed to be a groin to top center David Krejci, causing him to miss a majority of the early part of their schedule and adding to the lack of depth up front that began when the B’s couldn’t retain their top scorer last season, Jarome Iginla, in free agency this past summer, times have been tight in terms of goals for the league’s top team in the regular season last year.

Enter David Pastrnak, who the Bruins selected with their first pick in the NHL draft and the 25th selection overall.  Pastrnak was the story of the rookie development camp this past summer and entered training camp tagged as someone that not only could make the club, but could compete for the top line wing that was vacated by Iginla’s departure to the Colorado Avalanche.

When the rookie was hurt early in training camp and couldn’t really compete for a job, it was pretty much chalked up to his lack of size – he weighs 170 pounds soaking wet – and him being a comparative boy at the age of 18 trying to compete with men.  Therefore the Bruins coaching staff and general manager Peter Chiarelli never gave a real thought to the young Czech – who grew up idolizing fellow countryman Krejci – making the Bruins roster.

But instead of asking to go back to the team that holds his rights in Sweden and sulk like many players his age would do, Pastrnak agreed to be sent down to the Baby B’s in Providence and cut his teeth as a pro at the American Hockey League level.  All he did was dominate; scoring 5 goals and registering 13 assists for a total of 18 points in 17 games, showing the speed and offensive skill that made him the talk of the town this past July.

Based on the health of their roster and the lack of scoring the Bruins have suffered through, now is the time to take the training wheels off and see what the kid can do at the NHL level.  Playing his first game of his career against the Penguins on a Claude Julien coached team; the results were what you should have expected.

Julien kept the kid stapled to the bench in the first period, giving him only a few shifts and less than 2 minutes of playing time.  As the game developed, Claude’s reigns loosened slightly and by the third period Pastrnak began seeing multiple shifts with differing linemates and the results were nothing but positive.

Perhaps the best scoring opportunity the Bruins had before overtime came with approximately 6 minutes left in the third when he was paired with Bergeron and Brad Marchand.  After the puck was driven behind the net and retrieved by Pastrnak, he deftly delivered a sweet pass to Marchand who couldn’t convert against Marc-Andre Fleury.

When asked about the rookie’s performance following the 3-2 loss to the Pens, Julien’s response was what you would expect from a guy who thinks the term “goal” is a four letter word.  Claude said, “Well, we had to look at him, right? Plus, I thought he had good legs and so I put him on a couple lines here. And obviously you can see he’s a pretty dynamic player. He had that one shift with Bergy’s [Patrice Bergeron] line; March [Brad Marchand] and him had a real good shift there in the o-zone. I liked his game. I know he probably didn’t get a ton of ice time, but when he was out there I liked what he did.”

Of course you had to look at him, that’s the reason he was dressed, right?  It is not an outrageous second guess to think that if Julien had looked at him earlier, the Bruins might have came away with 2 points instead of the 1 that they got from the overtime loss.

It is time for the coach to not only focus on the regular season record and making the playoffs, but to find out exactly what kind of team they will be when/if they get there.

The team’s best option to solve their scoring issues may just have been residing in Providence since the end of September.  Julien has to show the willingness to play Pastrnak and allow him to grow – defensive deficiencies and all – to see if he just might be part of the cure to what has ailed them this season and what was a fatal flaw last season, the ability to score goals on a consistent basis generated from an offensive first player who may not back check to the level of Patrice Bergeron every night.

If the Bruins hope to really be a Cup contender come April, they will need to improve their offense.  David Pastrnak may just be the piece that can help them do that, the real question is whether Julien will allow him to do so.