Big Z is a big question mark for B’s

It is no secret that the elephant in room when it comes to whether the Bruins will rebound from missing the playoffs last season is the man, who when it comes to size, nearly equates the mass of the big-eared beast, Zdeno Chara. Big Z’s age – 38 years old entering the season – and health – he admitted that his PCL (posterior cruciate ligament) was only about 10 percent attached at the end of last season – have been bandied about since the B’s were bounced from the post-season last April.

When it comes to the science of Chara’s recovery, the results are a bit mixed. In February of 2014, Dr. Charles S Peterson of Medscape.com wrote a synopsis of the injury and what athletes can expect regarding their recovery when surgery is not performed. Regarding the results of one study involving athletes he writes – “The natural history of sports-related PCL injuries that are treated nonoperatively is quite good. In one study with a mean follow-up of 6.2 years, 80% of patients were satisfied with their knees and 84% had returned to their previous sport (68% at the same level of performance, 16% at a decreased level of performance).”

However, in the very next paragraph, he describes the findings of a second study that is not so promising, saying – “A subsequent, prospective study with a mean follow-up of 5.4 years found that 50% of athletes with isolated posterior laxity returned to the same sport at the same or higher level of performance and that 33% returned to the same sport at a lower level of performance (no patient had greater than grade II injuries).”

Confused? You are not alone. The scary fact is that Chara’s injury was a grade III – a tear – and he will be taking the ice with a permanently torn PCL this October, since he decided against surgery last season.

I’m no doctor, but that doesn’t sound good.

Science aside, the aging veteran simply wasn’t passing the eye test at the end of last season. Never swift on his feet by any standards, the Bruins captain looked extremely slow; lumbering to get back in the play as he was frequently beaten in his own end. Even completely healthy 38 year olds that have logged the number of minutes that Chara has in his career, seldom get quicker as the seasons pile up. And with the departure of Dougie Hamilton and Johnny Boychuk within the last calendar year, and no replacements to be found as of yet, one can argue that the B’s and head coach Claude Julien will need him to be at his best more than ever next season.

In a piece he posted earlier this week on the world wide leader’s website, ESPN’s Joe McDonald identifies Chara as the Bruins most important player.  Having now dealt Milan Lucic and Hamilton in the same off-season, it is a fact that has never been more true. 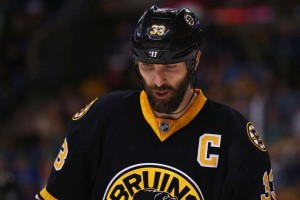 In a perfect world, the Bruins would have been transitioning Chara out of the minutes eating role on a nightly basis, slipping Hamilton into that spot, and leaning on the younger legs of what was thought to be the next great Bruins defenseman. Unfortunately, Dougie didn’t want to play that, at least in Boston.

So now just weeks before training camp is set to start, the Bruins defense corps remains remarkably thin, and their standard-bearer for the better part of the last decade looks to start his 17th season on a knee that will never be the same. No one ever has – or likely ever will – questioned Chara’s work ethic or fitness level, but even the once thought immortal Big Z is human, and there is only so much the human body can take.

There are a vast amount of questions surrounding this rebuilding on the fly Bruins team, but none are bigger than the one involving the B’s big man. Whether the Bruins can bounce back and make the playoffs next season is anyone’s guess right now.

Nevertheless, if their captain can’t come back and play at an elite level, one thing is for sure, the Bruins will once again be looking for tee times before the trees have leaves next spring.