Big Week Ahead for Boston Sports

Big Week Ahead for Boston Sports 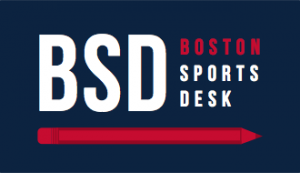 BOSTON:  This is a BIG weekend in Boston…actually this is a huge WEEK for sports in Boston.   It got even bigger when on Wednesday the ALCS schedule was released and New England sports fans found out the game 2 of the series would take place at the same time the Patriot’s Sunday Night Football matchup with the Chiefs.  I hope you have planned some nap time to stay up for what could mean midnight bedtimes ahead.

With the Red Sox advancing in the MLB playoffs and the NBA season starting earlier than ever, Boston is about to witness a rare occurrence in which all five of the area’s major professional sports teams are playing meaningful games during the same week.  The overlap of all five teams’ schedules has only happened once before — in 2013.

Time to get used to the five-team overlap???   If the Red Sox don’t get knocked out of the American League Championship Series in four or five games, it will continue for over a week…if not more.

The Bruins have already changed the time of one of their games due to the crammed schedule. Still, fans will be forced to make some tough decision due to scheduling conflicts.

This is the line-up:

Bruins vs. the Detroit Red Wings

Patriots vs. the Kansas City Chiefs

Celtics (season and home opener) vs. the Philadelphia 76ers

Bruins at the Calgary Flames

ALCS Game 5 (if necessary): Red Sox at the Houston Astros

Bruins at the Edmonton Oilers

Celtics at the Toronto Raptors

The following weekend, October 19-21, could potentially just as busy.

The Celtics also play at 7 p.m. Saturday night at the New York Knicks, while the Bruins continue their Canadian road trip with a 10 p.m. game against the Vancouver Canucks. The Patriots play Sunday afternoon at the Chicago Bears.

And oh, by the way, the Head of Charles Regatta will also be in town over that weekend.

We would love to hear how you are planning to watch Boston area sports this week, feel free to comment.