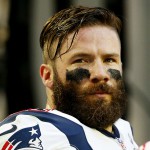 Yes..It was just one game, but Julian Edelman’s presence in the Patriots lineup Thursday nite seemed to have given new life to the offense despite Edelman having a limited role.

Tom Brady’s stat line looked worse than it actually was.  Brady finished 34 of 44 for 341 yards with 3 TD’s and 2 picks, neither one of which was his fault. But Brady was in command of this game, picking apart the Colts linebackers and secondary. Edelman picked up right where he left off in 2016. His time off for injury (2017) and the four games this season for PED use didn’t seem to have any impact on Brady’s go-to guy.

“It’s good to have him back,” said Belichick . “I think we have a long way to go. We do have a long way to go. He had a role in the offense. Certainly not a full one. We’ll see how it goes. We’ll figure it out next week.” Im sure Brady can’t wait for Edelman to have a larger role in the Patriots offense. Brady targeting Edelman 9 times, completing 7 of those for 54 yards. While not standout stats, The Brady-Edelman connection looked crisp with the lone exception being a dropped ball down the left side that had long-gainer all over it.

For his part, Edelman was just happy being back playing football after more than a years absence.  “It was great,” responded Edelman when asked about being back in the lineup . ” There’s some things that obviously we have to work on but it was good to get out there and catch some rocks and go out and make some plays and be with the fellas. I haven’t played football in – I think it was like 405 days or something like that so it was good to be out there in front of the crowd. They were rocking, they were awesome. Seeing all them was amazing. So, it was just great to be back.”

BB: I thought our guys did a really good job this week coming off the Miami game and turned the page quickly and getting ready to go. It was far from perfect, but we certainly played well enough that we deserved to win, so that’s good. It’s good to get this one behind us and turn our sights to Kansas City. I thought we had our moments here in all three phases, but just lacked some consistency to make it better than what it was. There were some big plays in all three areas. Hopefully we can build on the positives and still keep working to get some things fixed that we need to get fixed.

Q: What were your thoughts on Julian Edelman being able to step back in and pick up where he left off tonight?

Q: I know you’re team-oriented when talking about players. Can you just talk about what it means for Tom Brady to have thrown 500 touchdown passes?

Q: Tom Brady gave credit to Josh Gordon for how hard he was worked throughout the week. Is his touchdown catch tonight a reflection of his work ethic and ability to receive that kind of trust from Tom?

BB: Yeah, well, it was an extended play. It wasn’t really the way we drew it up, but it ended up being an extended play with two great players making a great play. Josh has worked hard. Tom has spent extra time working with him and really all of the receivers, backs and tight ends, as well. It’s good to see that hard work pay off.

Q: Can you talk about how well of a job Julian Edelman does of just taking what the defense gives him and not overthinking things with the ball in his hands?

BB: Yeah, well that’s the mark of any good player. You try not to force things. Try to take what’s available and make the best out of it. If it’s not there, then sign off and go somewhere else or cut your losses and move on to the next play. Really I think that’s all players. It’s good advice for all players. But yeah, Julian does a good job of that.

Q: You only had two running backs active on the roster tonight. How important was it for Sony Michel to step up and be a contributor tonight both in the running game and the passing game along with James White?

BB: Yeah, those guys did a great job. Both of them did a great job. We were dependent on them for quite a bit and they came through. They both carried a heavy load and very productively. They did a great job with ball security and making the plays that were available, and also making some plays on their own. They made some guys miss, broke some tackles, gained some extra yards. I thought it was a great job by both of those guys. They really came through for us.