Belichick is pursuing the wrong Lombardi 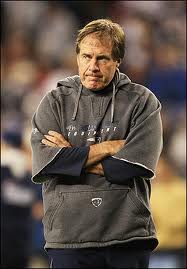 So what do you do if you are a team that has lost the last two years in the AFC Championship game and you are looking to add some help to your front office staff?  Why, you reach in the recycle bin and grab the guy who was just fired by not only one of the worst organizations in the National Football League, but arguably the biggest laughingstock in professional sports, the Cleveland Browns.

If reports are correct that is exactly what Bill Belichick is trying to do, as multiple sources are reporting the Patriots are in talks with the newly deposed Cleveland GM Michael Lombardi.

Sadly, Lombardi is no relation to the coaching legend of the same name and his resume reads a little less impressively than Vince’s.  His ties to Belichick go back to their days in Cleveland when Bill was the head coach and Lombardi served as the director of player personnel.

Since their days together with the Browns, Lombardi has been with several teams but his longest stint came from 1998 to 2007 when he served as Senior Personnel Executive for the Raiders where he worked closely with Al Davis on all football operations including both college and pro player evaluations.  After reaching a high water mark in 2002 with a Super Bowl appearance, the football program crashed and burned becoming a west coast version of the team that just fired him after one year on the job.

It is kind of curious to see Belichick stepping into the way back machine with Lombardi when long time Belichick associate Scott Pioli was out of work for the entire season before latching on with former Bill protégé Thomas Dimitroff in Atlanta.  The Pioli and Belichick team worked well enough to assemble the first and only salary cap era dynasty in the early 2000’s.  Since they have parted ways, neither has been able to find the Super Bowl winning formula again.

So why Lombardi and not Pioli?  The answer may be found on NFL.com in a piece by Kevin Parta (http://www.nfl.com/news/story/0ap2000000325574/article/michael-lombardi-in-talks-to-join-new-england-patriots).  Below is a paragraph taken from the article where Parta points out via a report by colleague Ian Rapoport that New England would likely not be paying Lombardi for his services as he is still pulling in a paycheck from Cleveland.

Parta writes, “If Lombardi does return to the Patriots, it won’t be for the money. Rapoport points out that because of Lombardi’s contract with the Browns, he likely would receive no extra money to work for New England — though it would offset what the Browns still need to pay.”

Surprise, surprise!  Bill is looking to get himself a bargain once again.  Shocker.

What the Patriots need to help with their player selection both in the draft and in free agency is someone who is not afraid of standing up to Bill and giving him an honest opinion, not some glorified intern picked off the trash heap.  By all indications that is what Pioli did in his time here and it is precisely what is lacking in the New England front office.

While Belichick the coach has few equals in the history of the league, Belichick the general manager has been fair to middling recently yet he has gotten a pass because his coach is so good.  Bill the GM is obsessed with “value”, often times choosing quantity over quality and does not show the sense of urgency needed to capitalize on the rapidly closing window of one of the greatest to ever play the game, Tom Brady.

His lack of depth in the receiver position was exposed this past season after Aaron Hernandez allegedly went on a shooting spree and Rob Gronkowski once again showed the durability of Dixie cup.  Meanwhile the team – like much of the AFC – is regressing and the likelihood of another championship is beginning to look as remote as Lombardi’s chances of getting Bill to open his purse strings.

Maybe it is a good sign that Bill recognizes that he needs another set of eyes looking at player personnel.  However, it would make much more sense if he looked for those set of eyes in the form of someone like Scott Pioli instead of another yes man.

If the Patriots hope to add the only Lombardi that matters in the future – the one you place in the trophy case and not in a cubicle – I’m afraid it will take more than an unpaid former assistant to Al Davis to do so.