BELICHICK..” I COULDN’T BE HAPPIER FOR THIS GROUP OF GUYS…”

BB: That was a great win for our football team today. It’s all about the players. They did a tremendous job in all three phases. We made plays in the kicking game: we had a turnover, we had a couple returns. We scored a lot of points offensively; had some turnovers on defense. The players played great, like they have all year. This is really a good group, it’s a hardworking group. They work with each other, they try to help each other get better and I couldn’t be happier for this group of guys. This has really been a good team to coach and guys deserve the success that they had there tonight. [I] just can’t say enough about what they did and how well they did. We needed them to play good and step up and play big tonight and they did. We got it from so many guys. That was really the story of the game in my opinion.

Q: What did it take to get from early-season struggles to where you are now? 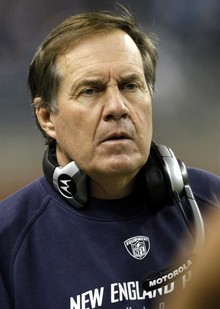 BB: We won 14 games. It’s better than a lot of other teams in the league could say. We’ve got good players and they played well. That’s really the bottom line. Players win games and they won it today; won it tonight.

Q: What can you say about LeGarrette Blount’s day?

BB: Great. Yeah, he ran good. Really he made some great cuts in not good conditions. He found yards when there weren’t a lot there and he’s a tough guy to tackle. He’s really a quality back. He made some great runs tonight. There were several times when he took nothing and turned it into something. Then when we had something, he got it and usually a little bit more. I thought he showed a lot of determination on the goal line to get the ball in the end zone. That was really an outstanding performance.

Q: How much did your schedule this year with the dogfights you’ve been in get your team ready?

BB: Yeah, I think as hard as it was week after week – we had about a six, seven-week stretch there where it seemed like every team was at the top of their division and playing really well. In the end it probably served us well. We had great competition all year. We played a lot of really good football teams and some great defenses, great defensive lines, front sevens, some great quarterbacks, great receivers. So, yeah, it was a very competitive schedule. Our guys had to prepare and work really hard every week to be ready for those challenges. They did that. They were relentless in their preparation. Now as we’re grinding into the postseason it’s more of the same. But they’re used to it, they’ve done it and they did a great job of it this week. We have to give the Colts a lot of credit. It’s a good football team. They handled Cincinnati; they went out to Denver and handled Denver. We know what that was like last year. They did a great job last week. This is a good football team, but our guys just played well tonight. You have to give them all the credit in the world. They did it.

Q: Can you talk about Jamie Collins and Kyle Arrington’s work on T.Y. Hilton?

BB: Yeah, you know Kyle really stepped up; played T.Y. good. T.Y. is a great receiver. He’s got outstanding speed and quickness and he’s a tough guy to cover on all routes: short, intermediate, deep. He had a great catch on the sideline dragging his feet. It was a perfect throw and a great catch. But that’s what it’s like playing against them. But Kyle competed really well. He jammed and he and Devin [McCourty] did a real good job on T.Y. Jamie’s been a big play guy for us all year. He’s really athletic; can really match up on pretty much anybody. He’s physical, he’s gained experience all through the year. He’s made big plays for us all season and he made several today. Obviously the interception was a very athletic; I’d say a typical Jamie Collins play. He’s capable of making those kind of plays that not a lot of guys in the league are.

Q: How much of a factor was the pressure you were able to put on Andrew Luck?

BB: It’s always important. Rob [Ninkovich] and Chandler [Jones] I thought both played well; gave us good pressure off the edge. We tried to make it hard for Luck to step up in the pocket. But he’s a great player. He got out a couple times and he’s a tough guy to handle. But we competed well. Rob and Chandler and those guys inside, High [Dont’a Hightower] and Jamie when they blitzed in the middle, but our defensive tackles just trying to keep him in the pocket and make him throw from inside and not get out. They worked hard to do that, they did a good job. Of course being ahead in the game and being able to really turn [it] pretty much into a one-dimensional game in the second half that was important, too. I thought that was a big drive for us at the end of the half. Even though we ended up with three points, it was a two-score lead. Then when we went like 85, 87 yards to start the third quarter. That was a tremendous drive. I thought that really helped us defensively get to some of the pass rush schemes and things there because the score was starting to dictate what was going to happen in the game. We were fortunate to be in that position.

Q: Can you give us an idea of how you felt the offensive line played?

BB: Those guys work really hard. They’re a good group. It’s kind of seamless when we go into practice as we rotate them through. They’re all in there; they all step in [and] have a lot of confidence in each other. It’s been that way all year. We’ve had to shuffle around a little bit, but they really work well together, work hard. I thought the Colts played the run pretty well. [Josh] Chapman, Art Jones is a tough guy to block, [Cory] Redding is really an excellent defensive lineman, [Erik] Walden on the edge, D’Qwell Jackson is reading those runs very quickly and getting up into the line of scrimmage. It was tough sledding in there, a lot tougher than it was in the first game. But we got a couple little creases and then LeGarrette made some yards on his own. The combination of those gave us good balance on the offense. But you know our offensive line, that’s a tough group of guys. They just hang in there and battle every week. I thought Sebastian [Vollmer] and Nate [Solder] really did a good job on the edges, as they usually do, but it’s always nice to get a play out of Nate. That wasn’t what we expected. We got a couple bonus plays tonight: the interceptions with [Darrelle] Revis and Jamie and the fumble that [Darius] Fleming handled. That was a tough play to make and the touchdown from Nate. Those are the kind of plays you can’t count on, but they fell our way tonight. That was certainly helpful.

Q: Why has Tom Brady been so consistent over so many years? Why do you think he’s still playing at such a high level?

BB: He’s a good player. Tom’s a good player. [He] works hard, is in good condition. He’s obviously very smart and experienced. He doesn’t get fooled very often. He works as hard as any player we have. He comes in early, studies a lot of film, knows our game plan, knows what the defense is doing and spends a lot of time on the practice field and after practice working on his timing [and] execution. When a guy is as talented as he is and works as hard as he does those results aren’t that surprising.

Q: This will be Tom’s sixth Super Bowl, the most ever for a quarterback. Is there anything that makes him more successful than a lot of other guys?

BB: Again, you have to have a good team. There are all the components of it. One guy can’t win in this league. All one guy can do is do his job and Tom does his job as well as anybody. I’m so thankful that he’s our quarterback. There’s nobody I’d rather have. He does everything well. He manages the running game, gets us out of some bad looks that the defense will occasionally show up in on a play. [He] executes well in critical situations like third down and the red area. The pass to [Rob] Gronkowski was a great catch, but it was a great throw. The pass to [Brandon] LaFell last week, those are the kind of plays that win games. You’ve got to have both ends of it. You have to have a great throw; you have to have a great catch. You have to be able to protect. There are a lot of people involved there. Tom just does his job well and that’s really all he can do. With a lot of other people doing their jobs well then you have a good team. We’re fortunate that we have that this year.