Q: Has the league contacted you about deflating footballs?

BB: Any questions on that you should talk to them about.

Q: How are you going to handle this week in terms of how much of t 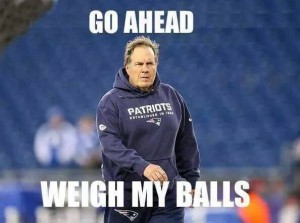 he game plan you’ll have in place prior to leaving for the Super Bowl?

BB: We’ll work through that the next couple days and be ready for the players when they come back on Thursday. We’ll have it figured out by then. 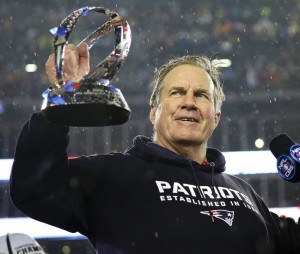 Q: When you have guys like Brandon Browner and Alan Branch who have played on the team you’re playing in the Super Bowl and you have an extra week to prepare, can they be of any particular advantage in terms of personnel and planning?

BB: Well, certainly what we see and what they’re doing now is important, but I’m sure that they can – they played with those guys, they certainly can give us some insight into some specifics about them.

Q: When you say they can be of some help, in what regard can they offer a word or two of advice that the coaching staff might find helpful?

Q: In general terms about Seattle, a question about Russell Wilson and Marshawn Lynch. Wilson is so effective as a runner. Is the fact that Lynch is so powerful of a threat, is that what makes their play-action and Wilson’s running so dangerous?

BB: Sure. It’s a big part of it; definitely a big part of it. You try to stop the run and then you have to deal with the play-action game. Certainly the running game is a big priority with both of them. Some of Wilson’s plays come on bootlegs, so he’s kind of running out of the pocket and you’re concerned about him running and then you stay back and he runs. Then you try to come up on him and the receiver uncovers and he throws it. He’s kind of trying to create that two-on-one fast break type of situation. They’re good at it. They’re really good at it. He’s good. He makes good decisions. It’s something that’s tied in with play-action. Some of it isn’t, but the bottom line is they do a good job with all of it.

Q: Is Andrew Luck more powerful and Wilson more shifty and that kind of thing?

BB: They’re both pretty strong runners. There’s just something, I can’t really put it into words. Wilson’s just got an instinctiveness. He just knows where people are. It looks like he’s going to get tackled and he doesn’t. It kind of reminds of watching [Roger] Staubach. You think he doesn’t see them, but he sees them or somehow he just knows they’re there. He’s got an uncanny sense of awareness of what’s around him – good or bad. I don’t know how you – I can’t really define it. I don’t know how you coach it; it’s just an awareness that all great players have it. All good players have it. I think he just has it at a higher level. It’s really impressive.

Q: I heard you on the radio talking about how the use of nickel personnel has climbed this year. Is that something you guys have been able to forecast, and a year ago or two years ago you saw defenses trending in this direction? My other question is how have your defensive backs and their ability to process information allowed you to be flexible this year on defense? It seemed like a lot of those guys had to be ready for a lot of different matchups in the game this past weekend.

BB: I’m taking the second question first. I think that’s definitely true. The Colts have four receivers and three tight ends and they played all seven of those players throughout the game in different combinations and sometimes the receivers would come in one-for-one or two-for-two and it wasn’t a different personnel group, it was just one guy coming in for somebody else. The combinations on the matchups were constantly moving throughout the course of the game. That created communication and identification matchup and challenge for us. The nickel defense, I think that’s definitely a trend. It’s not something that just happened this year, it’s been going that way, I’d say, for a period of years and just going higher. You could go back there and track those stats on whatever, I’m sure there are a bunch of websites that do it – Pro Football Extra or whatever they are. Yeah, I think it’s a definite trend. I don’t think it’s unique to us; it’s league-wide.

Q: What do you remember most about the game up in Seattle a few years back? Do you think the game could be a helpful preparation tool?

BB: Yeah sure, I think there’s some value to it. We’ll definitely look at that game, as I’m sure they will. Some things are similar, but it’s a couple years ago and there are a lot of things that have changed. It will be one piece of a big puzzle. We’ll just try to put it all together and see what we can come up with. But yeah, no, we’ll definitely look at that. It’s relevant.

Q: Do you have any memories from that game?

BB: Yeah. Not a lot of great ones.

Q: The other day when Sealver Siliga goes out and you’re already without Chris Jones, what are your thoughts on the job the defensive line did with the rotation and being a little bit shorthanded and the good job they did on Sunday?

BB: Yeah, I thought our line played solidly. It was good. We brought Joe [Vellano] up on the roster for Chris, who was inactive. So with Joe, Alan [Branch], Sealver and Vince [Wilfork], the play time was kind of divided there. It was good that we had that little bit extra depth, especially when Sealver went out for, I don’t know, half a quarter or however long it was. No, I thought those guys … it was kind of an unsung job in that game of pushing the pocket, trying to keep Luck from stepping up. It wasn’t perfect, but we didn’t make it as easy for them as maybe he’s had at other times to move up into the pocket and deliver the ball that he had to deal with some guys getting pushed on him a little bit. That was kind of the idea there. But no, I think those guys competed well. They gave us a high level of play.