Belichick & Brady do what everyone thought they would do 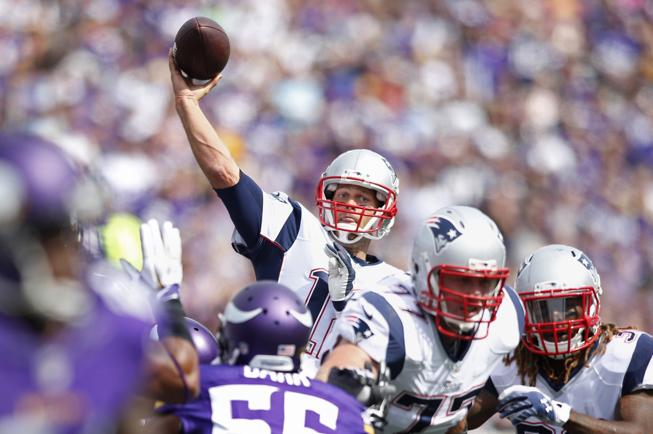 That was more like it, right?  Isn’t this what pretty much everyone from Bangor to Boston was thinking you would see when the season started a week ago in Miami?

The collective concern surrounding the Patriots after a week one loss against the Dolphins was likely as overplayed as this week’s performance against a team that saw it’s star player on offense, Adrian Peterson, get sidelined after a sickening report of him being indicted for child abuse earlier this week will be now.

No matter the competition, the Patriots looked like the team that many touted as much improved on defense and better on offense due to improved health and personnel.  Darrell Revis – who many thought was misused in zone coverage last week – got his first interception, and the Pats defense actually got pressure on the quarterback the way some thought they would be able to, to the tune of 4 interceptions and 4 sacks.

On offense, the line that was so inept in the second half against the Dolphins held their own and then some, as Brady- who was beaten and bruised to an extreme last week – was relatively unscathed going down only once this Sunday.

So what do we know about this team that we didn’t know after last week’s suck fest in South Beach?  Not much.

Anyone who didn’t think that the Patriots would rebound this week against the Vikes hasn’t been watching them the past decade or so.  No one beats Tom Brady and Bill Belichick two times in a row in the regular season.

They are the closest thing to a lock following a loss as sucky weather following November 1st is in New England.  According to a column written by Michael Whitmer of the Boston Globe early this week, “Since Bill Belichick took over as head coach before the 2000 season, the Patriots have lost at least two consecutive games in just seven of his 14 seasons.”

In other words, TB12 and the Hooded One are pretty good a righting the ship.

And a righting of the ship was definitely among the top things on the agenda of the coach and quarterback entering this weekend.  Let’s face it, both the offensive and defensive lines were sieves against Miami in the opener, and the newly rebuilt defense – featuring the before mentioned relocation of Revis Island – was a disappointment to be kind.

A rally of the troops was necessary for both coach and quarterback, and not so surprisingly they did it again.

In theory the Patriots should have a little over a month and a half to find out who they really are before being faced with the Chicago Bears and Denver Broncos in back to back in weeks 8 and 9 respectively.  Games against the Raiders, Chiefs and Bengals (they are still the freaking Bengals), followed by two against AFC East “rivals” (Isn’t it written the NFL bylaws that they simply need to surrender at the site of the Patriots by now?) the Buffalo Bills and New York Jets are a perfect example of how the schedule makers in the NFL adhere to the Globe’s Dan Shaughnessy’s edict of aligning the Tomato Can’s early and often in the regular season.

The real questions surrounding this team will be whether Rob Gronkowski can return to being “Gronk” with a rebuilt knee and a Volkswagen on his forearm, and if someone other than Julien Edelman can emerge as a threat at wide receiver?

Is the defense that harassed and delivered turnovers against Matt Cassel and the Vikings capable of do so against someone like Peyton Manning and the Broncos?   Or how will Tom Brady respond when he sees a pass rush like he did in the second half against the Dolphins when he was pressured relentlessly resulting in a couple of fumbles and multiple sacks?

For all the consternation in Patriots Nation last week, did anyone really think that this team led by these two would start the season 0-2?  No one in the league is better at stockpiling regular season wins than Brady and Belichick.

Relax Patriot fans, order has been restored.  Tom and Bill went and did what we thought they would do and got the ship back on course.  It will still be many months to go to see if they can do what they haven’t done in nearly a decade and get the ship to port with some silver aboard.