Banged up Bruins have to get better 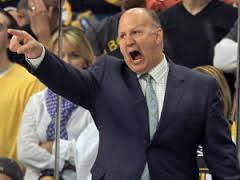 The mean machine that is the Boston Bruins team when they are right has been dinged and dented by injury during the first half of the season and is now officially leaking oil and beginning to blow smoke heading towards the Olympic break in February.  Seemingly able to withstand the loss of key players to injury early on with contributions from the kids from Providence, they now seem lost since Dennis Seidenberg went down in December.

No one who has watched this team for any length of time can underestimate the value of the burly backliner or the steady presence he has on the penalty kill, but is his absence enough to cause the defensive ship to list this much?   The numbers will tell you he is, as in the 8 games he has missed the Bruins have given up 4 or more goals 5 times and their penalty kill has dropped from near the top of the league (3rd, 86.9%) to the middle of the pack (12th, 82.8%).  Add to that since the calendar flipped from 2013 to 2014 they haven’t scored a power play goal.

It is time for a tune up.

The upside to the amount of injuries that they have sustained is that they have proven they have depth at the AHL level in the organization.  Now GM Peter Chiarelli has the difficult task of identifying what part of that depth is expendable and see what can be had by offering some of it up for trade to help fill the big hole created by the loss of Seidenberg.   Matt Bartkowski, one of the smaller and speedier puck moving defensemen – who has been dealt once before in the trade that never was with Calgary for Jarome Iginla last year – perhaps could be a piece to a deal for a bigger more stay at home blueliner in return.

The B’s also appear to have depth at the goaltending position, although you would never know it by head coach Claude Julien’s insistence on trotting Tuukka Rask out every night until he finally passes out from exhaustion in his crease.  Chiarelli spent a high draft pick on Malcolm Subban, whose name was mentioned around the deadline last year when Chiarelli said he would not trade the young goalie. Also, based on his performance both in Providence and the cup of coffee he had with the big club, Niklas Svedberg seems to be a piece that other teams may find attractive.  Either one of these 2 netminders might have to be a part in a deal to net a minutes eating defensive defenseman.

As the World Series winning Red Sox GM Ben Cherington likes to say, you use draft picks to build up assets that you use in order to acquire pieces you need to win championships.  Now may just be the time that Chiarelli might want to take some advise from his baseball brethren.

As for the rest of what ails the B’s, the lack of production out of the top line, trying to find a right combination that works on the 3rd line and defensive breakdowns leading to easy goals for the opposition, we have seen this before.  Milan Lucic and David Krejci have been prone to extended periods of disappearing during the regular season and from what he has shown during his time with the big B’s, Ryan Spooner looks as if he could the piece that makes that 3rd unit productive.  And if Claude Julien has shown us anything in his tenure with the Bruins it is that he can fix defensive deficiencies.

The B’s are still that beast of a big rig we have all come to know over the past several years, they just need a little fine tuning.  If they can add to their back end and perhaps give their starting goalie a breather every now and then, they should be showroom ready by the time the playoffs start in April.