Baltimore a bad matchup for the Patriots 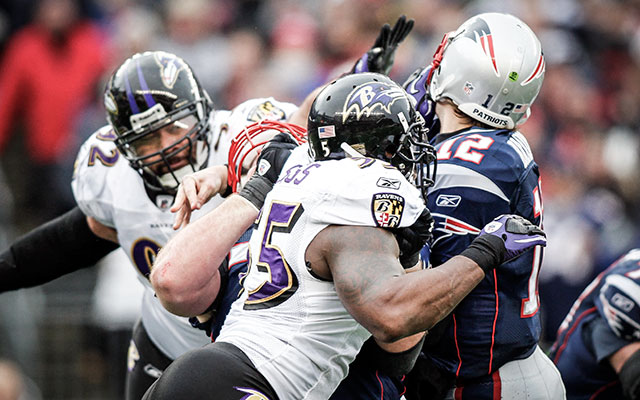 As the Patriots prepare to head to Baltimore to face the Ravens this Sunday, you could make the argument that given the choice they would choose any of the other 30 teams in the NFL to face at such an important juncture of the season.  Simply said, the Ravens don’t fear the Patriots like many other teams do when the weather gets cold and the games get big.  In fact, they welcome them.

While the Patriots enjoy a 6-1 regular season record against the bad boys from Baltimore, the Ravens have won more when the teams have matched up when it has mattered most, in the playoffs.  The blackbirds from Baltimore have sent the Pats packing 2 out of the 3 times they have faced each other in the post season, including last year’s AFC title game by the score of 28-13.

Much like the Patriots teams that won Super Bowls, the defending champion Ravens are a team that is built on defense and – as we have seen over the past several years in New England – a stout defense goes a lot further in big games than a flashy offense, especially a flashy offense that has had its flash removed.  And despite losing marquee names like Ed Reed, Ray Lewis, Bernard Pollard, Paul Kruger and Danelle Ellerbe, the Ravens defense ranks 7th in overall defense in the NFL heading into Sunday’s showdown against the Pats.

That’s not good news for a Patriot offense that is reeling after the loss of Rob Gronkowski.  New England, who has lacked a down field threat since Randy Moss misplaced his meds and was dealt in October of 2010, are hamstrung in the red zone without their brawny yet brittle tight end.  The over abundance of small slot receivers not named Wes Welker and their mistrust of a running back on goal line situations, has made the Pats offense the least likely in the league to score in the red zone when number 87 is missing from the formation.

Couple that with the Patriots utter inability to cover in their secondary and a linebacking corps that has been greatly diminished since all pro Jarod Mayo went down in October, New England has made mediocre quarterbacks like Jason Campbell and Ryan Tannehill look like the second coming of Bernie Kosar and Dan Marino in recent weeks.  And the run defense that once was a given for the Pats with Vince Wilfork dominating the nose has fallen by the wayside like the big man himself.

This is not a pretty picture for the Patriots who are used to teams cowering in their wake, afraid to face the might combination of Brady and Belichick when the weather turns cold.  Make no mistake, this Ravens team is anything but afraid of the Pats, just having gone to their building and beaten the snot out of them on their way to a Super Bowl a scant 11 months ago.

And there is no love lost between these teams.  Back in October, when asked about what he thought by ESPN.com of Pats quarterback Tom Brady Baltimore linebacker Terrell Suggs said, “I don’t like him. He don’t like me. I don’t like his hair. I don’t know. I don’t like his smug attitude. But then again he probably doesn’t like my a—— attitude. … Everybody just seems to worship the guy — not me, though.”

It is that kind of attitude that the Patriots will face as they head to Baltimore on Sunday.  An attitude of dislike and disrespect from a team that has sent them home 2 of the last 3 times they met in a playoff atmosphere.  For the Patriots and the Ravens, Sunday’s showdown might as well be a playoff game for whoever wins is in and the other, well lets just say the Patriots might not want to let themselves think about that right now.  Playing for their playoff lives against the Buffalo Bills is not what anyone was imagining entering this season.

Anyone, of course, not named Terrell Suggs.