As the pitching staff struggles, it may be time for the Sox to see if the kids are alright 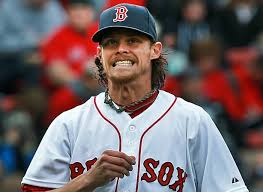 Cue the Captain Obvious quotes, say it anyway you would like to, but this Red Sox team needs pitching the same way New Englanders need consecutive days in the 70s; desperately.

As if Justin Masterson’s sloppy sliders weren’t enough to overcome last night in Baltimore, Mr. Used-To-Be-Automatic, Koji Uehara, came in the game in the 10th inning in a closing situation with the Sox up 4-3, and did his best impression of John “Way Back” Wasdin, giving up a game-winning home run run to David “Bleeping” Lough to deep right field.

Holy 1996, Batman. Built to bash the ball – which hasn’t exactly happened thus far this year – general manager Ben Cherington has seemingly taken a ride in the way back machine (pun intended), and has gone back to the team-building formula that was so ineffective for 86 years prior to the team’s breakthrough in 2004.

Say it with me, “pitching and defense win championships.” That wasn’t that hard now, was it?

Not to beat a dead horse – which is kind of ironic, seeing this team has nothing but ponies in their pitching staff right now – but who the heck would you hand the ball to with any kind of confidence if the season was on the line right now? Bueller…Bueller…Bueller?

If the early season is any indication, the American League East is pedestrian at best. With the teams so tightly packed in the standings, just two games separate the tied for the division leading Red Sox, Tampa Bay Rays, and New York Yankees, with the basement dwelling Baltimore Orioles. Of the pitching staffs in the division, only the Yankees rank above middle of the pack, currently 8th in MLB with a 3.46 ERA. The drop off is pretty steep after that, with the Rays 19th at 3.96, the Red Sox are 24th at 4.37; the Blue Jays rank 28th at 4.75, and the Orioles are dead last in all of baseball at 4.98.

Don’t let the stat line fool you – as it seems to have fooled some of the Sox beat writers – Masterson was borderline pathetic in last night’s ball game. His velocity has fallen through the floor, and while the box score may not look that bad, the eyes tell a different story. The bottom line is, Masterson should be bumped to the bullpen where he belongs and his next start should go to Brian Johnson, who is currently lights-out in Pawtucket, to the tune of a 2-1 record with a 0.56 through his first three starts. It is time the Red Sox start to figure out what they have in their system before exploring options outside the organization.

Normally, patience would be a virtue the Sox could afford to exercise not yet four turns through the rotation. However, this staff has no anchor, and the guy they signed to a 4 year, $82.5 million extension in hope of him becoming that guy, Rick Porcello, has barely pitched like a number five thus far. Their ace by default entering the season, Clay Buchholz, is about as predictable as a spring day in Boston, that is to say, not what anyone would call reliable.

In the last 20 or so years, the Sox have consistently had a guy on their starting staff that they could look to in order to end losing streaks and take the pressure off the bullpen. From Clemens, to Pedro, to Schilling, to Beckett, and lastly to Lester who was foolishly dealt away last year, there was always someone that stood above the staff and set the tone when it was his day to toe the rubber when his team needed him most.

The Red Sox not only don’t have that type of guy this year, they have no one who is even close.

Where have you gone, Cole Hamels to Boston deal? Red Sox Nation turns its lonely eyes to you. Boo, hoo, hoo.

Surely if this crisis of confidence on the mound continues for the Sox, there will be an increasing call for the Red Sox GM to do something to bolster the battered starting staff. Heck, John Farrell admitted that due to the beating his bullpen has taken in terms of the number of innings they have had to pitch, the Sox put Shane Victorino on the disabled list, so they would have room to recall the right-handed Matt Barnes from Pawtucket to help add depth to a tired Boston ‘pen.

Before they blow it up and trade the farm to Philly for Hamels and Jonathan “Boston You’re My Home” Papelbon, the Sox owe it to themselves to see what they have in the system. Masterson’s next turn in the rotation should go to Johnson. If the likes of Wade Miley and Joe Kelly still struggle, or show the bouts of inconsistency that have been so consistent this season, Eduardo Rodriguez or Henry Owens should be summoned from Pawtucket for an audition as well.

With the division so tight, the season most likely won’t be won in April or May, but it could most certainly be lost during that time. Before making moves that could affect their future to acquire a veteran starter, the Sox should see if any of the kids can help carry the load on the big stage in Boston.