As always Patriot Nation goes whistling past the graveyard 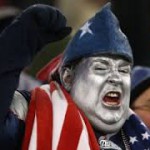 Having read and listened to all the talk and type surrounding this week’s playoff game between the Patriots and the “tomato can of the week” (check is in the mail, Danny boy) Indianapolis Colts, it isn’t hard to see why Patriot fans and the media that covers them is seen as the most pretentious, pom pom waving parade of paranoid sycophants across the other 31 cities in the NFL.

After all a team that has wins against the likes of San Francisco, Seattle, Denver and Kansas City (twice) already on its resume is clearly a team that can be looked upon as a mere speed bump on your road to a date with destiny a mile high in Colorado next weekend.

Before this week I am willing to bet no one who resides in Patriot Nation could have told me who Steve Beauharnais was unless they worked the draft board for Bill Belichick or went to Rutgers (By the way it is a proven fact that if you lettered in football at Rutgers your chances of being drafted by the Patriots is better than Rob Gronkowski making it through an entire season healthy, but I digress.).   If I were you I would bone up on the pronunciation of his name because number 58 on your scorecard (but number 1 in our hearts) is almost certain to see time on the field this week unless Andre Tippett decides to dust off his old number 56 jersey and play at the linebacker position for the Pats this weekend.

And how about Josh Kline, heard of him?  Amazingly he didn’t go to Rutgers but the Kent State product just might find some time manning the offensive guard position should something happen to the one good leg that Logan Mankins has left to stand on.

In addition to the lack of depth on both sides of the ball due to injury is the pesky fact that without Gronkowski the Patriots are the worst in the NFL when it comes to converting scoring opportunities in the red zone, mostly due to the fact that a majority of the smurfs they employ at the receiver position have to look up to see Doug Flutie.  The two tight end system they built their offense around in the off-season now consists of Michael Hoomanawanui and Matthew Mulligan because one of the projected starters is in a cast and the other is in cuffs.

A step back from the patronizing propaganda promoted in print and over broadcast media throughout Patriot Nation shows two teams that are fairly similar.  Neither team plays great defense, both have tremendous quarterbacks who lack sufficient weapons and both have shown the ability to comeback from sizable deficits this season.  The difference is the Colts have shown the ability to win on the road against good teams (at 49ers & at Chiefs) so the friendly confines of Gillette Stadium won’t be overwhelming for them (especially if the wine and cheese crowd in the red seats decide their piggies are cold and choose to sip their chardonnay by the fireside after the first quarter).

Anyone who knows anything about the NFL has said on numerous occasions this year that there are no great teams in the league this year.  That is especially true in the AFC, where every team remaining is flawed.  But go try and tell that to a member of Patriot Nation and you are likely to get a face full of foam fingers.

Pats fans worry?  No way, that’s for the tomato cans.