A Rae of Hope – A story of giving and thanks

On the last Thursday of October, a crowd began to assemble at the intersection of Brookfield Drive and Elsie Road in the Brookfield neighborhood of Brockton.

While the weather was less than ideal – the rain was steady, and for the first time all season, autumn temperatures were in the air – yet, nothing could put a damper on the celebration that was about to occur. 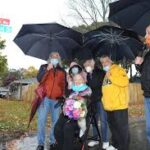 Photo courtesy of the Brockton Enterprise

The gathering consisted of city officials including Mayor Robert Sullivan, Ward 1 Councilor Timothy Cruise, Ward 6 Councilor Jack Lally, DPW’s Larry Rowley, family, friends, and thankful neighbors. They had all come together to honor a remarkable woman who had made her family home for the last 63 years, just some several hundred yards from the somewhat soggy event.

In many ways, the conditions could not have been more perfect. It seemed fitting that the dedication of Rae Zuckerman Way should take place amongst the clouds and rain. Given the fact that she spent the better part of the last four decades extending a helping hand to those who seemingly had slipped into solitary darkness and tried to lead them to a path back into the light, the irony seemed to be heaven sent.

As her youngest son Bobby said to the Brockton Enterprise’s Marc Larocque before the well-deserved dedication, it was the story of a young woman who became isolated and lonely after a car accident that left her paralyzed in the early 1980s. 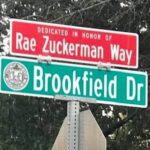 Photo courtesy of the Brockton Enterprise.

“She read that article and she said, ‘There’s got to be other people like this stuck in the house,'” said Bobby Zuckerman, her son. “So she wanted to make a place where they can go and mingle and have something to do. The thing is, there’s no one disabled in my family. She was a stay-at-home housewife who raised two boys. It was really out of the blue that she did this after reading a story in the Brockton Enterprise. She said, ‘How do I help this kid and other people?’ She founded a nonprofit. She learned to write grants.”

While others might have felt momentary pity until moving on to their daily concerns, Mrs. Zuckerman decided to take action.

In 1983 the longtime Brookfield Drive resident that now bears her name founded the nonprofit Living Independently for Equality Inc., whose mission centers upon opening up avenues for socialization for those who have not have had the opportunities that most of us take for granted every day.

“Use your voice for kindness, your ears for compassion, your hands for charity, your mind for truth, and your heart for love,” is a long referenced quote which the original orator or writer remains unknown.

Yet it was the embodiment of those words that Mrs. Zuckerman and the selfless supporters of her cause put into action as if they had written it themselves almost 40 years ago. 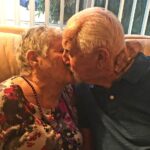 The truth is, this story hits home for me in a couple of different ways. As someone who has seen the results of a debilitating physical ailment or disease, that they cannot control, I know all too well how losing what we all take for granted can threaten to take one’s soul.

When most avert their eyes – or worse yet, ignore to recognize those who are suffering – it is those who embrace humanity at every level that serves as the beacon whose light shines through even the darkest skies to inspire us all.

Almost all that I have written to this point you could have found in the recent stories that have appeared regarding the celebration of Rea Zuckerman’s contributions that led to the dedication of the sign that will honor her for years to come.

For what it is worth – and for those who care – I wanted to share the memories of my youth growing up with her two sons – Bobby and Howie (you can call me Al) – that I consider to this day to be lifelong friends. 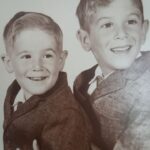 The Zuckerman brothers before they became hippies.
Photo courtesy of Bobby Zuckerman

I’m not sure when I met Bobby or Howie, but it feels like a lifetime ago. Growing up in the Brookfield section of Brockton in the late 1970s and early ’80, everyone knew everybody. And while heaven knows it wasn’t exactly Mayberry, it was undoubtedly a tight-knit community.

There are a couple of things that come to mind when I think of the Zuckerman’s Campanelli ranch home when I think back to those days.

First and foremost was the Brambach Baby Grand piano that remains in the same spot in their living room today. I’m pretty sure that you could search the several thousands of these post-World War II homes that were constructed throughout eastern Massachusetts, and you would not find another that featured such a gem.

The second is the number of hours that we would spend in Bobby’s room listening to Rush albums – in case you didn’t know, the former star of Community Auditions was rather fond of Geddy, Alex, and Neil – and without fail, these sessions would be proceeded by a healthy intake of some of the best sticky/icky that the neighborhood could provide.

I can’t remember the precise time or circumstance – like that should be shocking news – that Mrs. Zuckerman told us she would like to take a video to show us how silly we behaved after inhaling some of the plant that would make Doritos so popular. 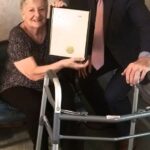 Thankfully she didn’t, because I’m sure the result would have been even sillier than she could ever have imagined.

And while the years have passed by faster than I could have ever have imagined, I will always remember the welcomeness I felt in their family home.

The dignified and yet warming presence that both Mrs. Zuckerman and her husband Bernie – who, if you look up the word gentleman in the dictionary, his picture would be next to the definition – was simply conveyed just by their nature. 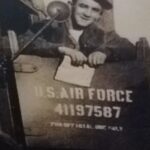 That is why I find the appreciation shown to Rea Zuckerman and her years of dedication to helping others so inspiring on so many levels.

In these times of isolation, despair, and disregard for anyone who doesn’t share your political views, the story of Brockton’s Rea of Hope is proof that if you choose to help one another instead of finding a reason not to, anything is possible.

The path that Rea Zuckerman began to pave nearly 40 years ago was laid upon a foundation of love, respect, and a dedication she felt for her community. The recognition she received just a month ago should serve as a shining beacon for all of us who might just be questioning where our collective humanity is headed.

For that I offer my thanks to Mrs. Zuckerman and those like her that give hope to others and ask for nothing in return.

That being said, if I were you, I would still find a way to ground Bobby for the way we made your house smell funny from his room back in the day.