A Monday night win is a must for the Pats 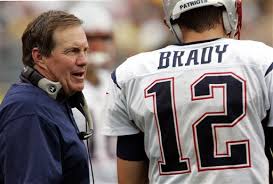 It never used to be like this.  Games in September were a given for the Patriots, you pretty much have to go back to September 23rd in 2001 to discover another “must win” for the Pats so early in the season.

That was the date, of course, that Mo Lewis sent Drew Bledsoe to the hospital and the Tom Brady era for the Patriots began.  To say that expectations were low for the 6th round selection from Michigan when he took Bledsoe’s place is an understatement of epic proportions that is only matched by the unreasonable demands that have been placed upon his plate by his head coach in recent years.

I guess you could say the opposite would be true should the somewhat surprisingly slightly favored Patriots were to lose to the Kansas City Chiefs on Monday night and end the first month of what was once thought to be a season of promise at 2-2.  And while the Pats started the 2012 season going .500 in September and yet managed to make the Super Bowl, that team did not have the gaping holes on the offensive line that this team has.

Not to mention, Tom Brady had multiple targets at his disposal that sent shivers down the spines of opposing defenses in Danny Woodhead, Wes Welker, Rob Gronkowski and Aaron Hernandez.  Since then, Woodhead and Welker have left via free agency, Hernandez has been accused of murdering three people and Gronkowski has had multiple surgeries on his forearm, back and right knee that have made him a shell of his former self.

Currently Brady’s read progression when he drops back to throw – if he actually gets the time to work through it – consists of locking in on Julien Edelman and if he is not open trying to jam the ball into Gronk.

So much for the open receiver being his favorite receiver.

On the bright side, the Pats defense – although they haven’t actually faced an offense of note – are seemingly beginning to forge themselves into the most stout group that has been seen in New England since the fading glory days of 2007.  Despite the fact that first year Patriot Darrelle Revis has expressed some frustration at the way he is being used (which echoes what almost everyone watching and wondering why he is playing so much zone is thinking), the defense has come closest to matching the pre-season expectations that were placed upon this team entering the season.

Going into Kansas City on Monday night, Bill Belichick’s Patriots are entering unfamiliar territory.  Rarely has there been this many questions about the offense at this point of the season, and the concerns about protecting the quarterback are the highest they have ever been since Brady stepped under center that September afternoon some 13 years ago.

While it was almost inconceivable to believe that even the most plugged in Patriots reporters could not name the starting offensive line starting the season, Belichick saw fit to deal his best run blocking lineman and the heart and sole of that group to Tampa Bay for a rarely used tight end in Tim Wright.  Since then they have been listless and could leave Tom Brady lifeless if their play doesn’t quickly improve.

What looked to be a favorable schedule to start the season for the Patriots has proven to be anything but.  Their first primetime tilt of the year on the road against the Chiefs will end a month of very winnable games against the quarterback-less Dolphins, the absent Adrian Peterson Vikings and the annually oblivious Oakland Raiders that has not exactly gone the way it seemed to be scripted when camp ended in August.

And while it would seemingly take an act of god for the Brady/Belichick led Pats not to win their umpteenth AFC East title in a division that features starting quarterbacks the likes of E.J. Manuel, Ryan Tannehill, and Geno Smith, the expectations for this team entering the season was to play in Glendale come February and not fight for their lives in Kansas City in September.

Should the Patriots lose against the Chiefs on Monday night, it could be a blow to their season’s aspirations similar to the one that ended Drew Bledsoe’s career in New England back in 2001.