Here is a little “poem” for the holidays.  I apologize in advance to every poet for calling it that.

‘Twas a bit before Christmas and throughout the land

Sports fans were jealous of Boston, but we understand

Not one was forgotten, we captured them all

The trophies were polished all snug on their shelves

With so many victories, we’ve stopped counting ourselves

Just resting up for that next victory lap

When on the big screen there arose such a clatter

I turned up the volume to see what was the matter

Up from the recliner I flew in a flash

The lights in Fenway gave the old bandbox a glow

The ball kept on carrying, I think it might go!

Then in an instant Torii disappeared

The cop in the bullpen let out a cheer!

I was jumping around like a 12 year old child

Papi came through, he had done it again!

The ballgame was tied but I knew they would win

The next thing you know the World Series was here

What a great end to such a meaningful year!

The bearded brothers from Boston would not be denied

At the start of the season our town took a hit

It hurt us, it stung us, it shook us a bit

The loss of four lives that had just gotten started

That it happened in our town just made it harder

We needed a respite, a place we could go

A spot better than Fenway I just do not know

Like Big Papi said, this is our bleeping city

And much like the town the team started to rise

Winning so many ballgames, what a surprise!

When first the season started, they had some new names

And what do you know they just kept winning games!

There was Jonny, Koji, Bogaerts and Drew

The younger brother not you know who

Victorino, Nava, Nap and his beard

Everyone had ‘em but some just looked weird!

The team everyone picked to finish in last place

Was hell bent on showing that wasn’t the case

They banded together with one common cause

Soon Fenway was crowded and filled with applause

Late in October they took to the field

Their goal within grasp they just wouldn’t yield

That every little thing was gonna be alright

What an amazing season, an incredible feat

This team full of characters just couldn’t be beat

They thanked the fans as champions often do

And told the heroes and victims, this one’s for you!

The party that followed was a wonderful thing

We Boston fans know how to celebrate rings

As the duck boats rode off I heard almost in song

Merry Christmas and Happy New Year to you all! 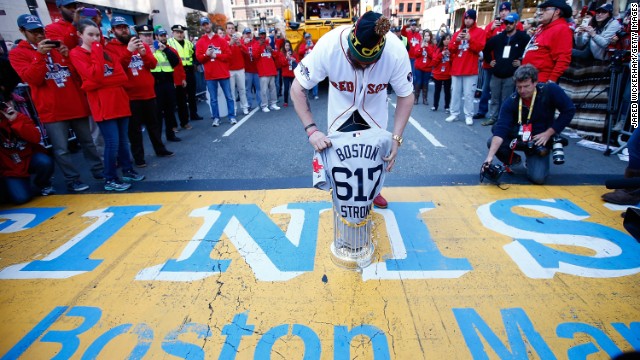