A battered Brady meets with the media

On the pressure he faced today 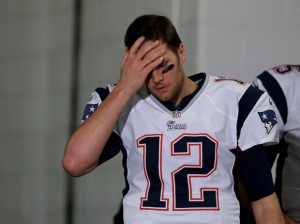 “They’ve got a great rush. They’ve got some great pass rushers, they’ve got interior pass rushes, they’ve got some outside rushes. I think you complement that with good coverage. It was just tough for us to ever get into a rhythm and finally to score some points here at the end, and then for it to come down to a two-point conversion is a tough way to obviously end the season.”
On the interceptions
“It was just a bad decision. [TE] [Rob Gronkowski] went in on him and was breaking out, and I think [LB] Von [Miller] knew that and he did and he made a good play.”
On if he expected Miller to drop
“They rush more often than not, but those are the things that quarterbacks have to see.”
On the defensive line
“It was a tough day, hard-fought game all day. They’re a very good defense. They played well all season. They’ve got good coverage, they’ve got a good rush, put a lot of pressure on you. We made a lot of plays. There were just a lot of plays we didn’t make. A lot of fourth down plays that ended up costing us. We made a couple, but again there were too many of those and we never could play with a lead, we never could play on our terms, so it was an uphill battle all day.”
On the problems they faced on fourth down
“I think you make some, you’re not going to make them all. We hit the fourth and 10 to Gronk, we hit a fourth down for the touchdown. I just don’t think you’re going to be 100 percent in those situations, so unfortunately we had four or five of them, they just didn’t go our way. They cost us points and cost us an opportunity to move on.”
On the talk at halftime
“We were happy we were still in the game based on the way we played offensively. We just could never really get in a rhythm with what we were doing, so it was a tough, hard-fought game. They did some good things defensively. We had some plays offensively I think we should have made, and we just didn’t make them.”
On when he did have time to throw the ball
“Yeah, I think you get into some rhythm out there, and then when you do have time you’re still in that quick rhythm. There were definitely times where I had opportunities to hold the ball and didn’t really have great awareness of where people were around me. Maybe sometimes I had more time, so I’ll look back on all those plays. It was a disappointing loss because this team fought pretty hard just to come up short on a two-point play. It would have been a fun overtime had we had the opportunity, but we just came up one play short.”