BOSTON- On Tuesday afternoon, the Bruins held their annual media day at Warrior Ice Arena. Looking to avenge their Stanley Cup finals loss, Boston looks to turn the page on the new 2019-20 season.
“Obviously, with what happened, I don’t think we’ll ever get over that, but I think we’re excited about this season and what it’s going to bring. We have the majority of the guys back and added a couple good players, so we’re just looking forward to the next step and getting things going again,” said LW Brad Marchand. 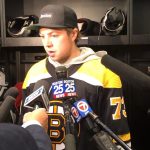 On a Media day in which Chairman Charlie Jacobs talked about the new TD Gardenrenovations, the entire Bruins organization seemed excited with the organization’s direction.
“I’ll tell you what. It is vastly different… Our aspirations when we began the project was to have the best in-arena experience in North America for our event-goers and hopefully, the feedback will reflect that when we achieve it,” said Jacobs when asked about the new TD Garden.
With the regular season right around the corner, the Boston Bruins open up with the third-best odds to win the 2020 Stanley Cup Finals. In Thursday’s practice, the team seemed to have energy, excitement and a work ethic that is motivated by the 2019 Finals loss.
A young core with a lot of experience, led by veteran presence is something Bruins fans should look forward to this season.  When talking about the tight core and the chemistry within the Bruins hockey team, veteran G Tuukka Rask said “We still have the same core group of guys and veteran leadership here that lead by example on and off the ice. I don’t think it’s going to be an issue for us.”
The Bruins open up the 2019-20 regular season on Thursday night in Dallas as they face the Stars to open up a four-game west coast road trip.
Kevin Harriman
Permalink
Bruins
Boston Bruins, Brad Marchand, Bruins, Charlie Jacobs, Cup Finals, Jeremy Jacobs, Jordan Moore, NHL, Tuukka Rask
No comments
283
0
0